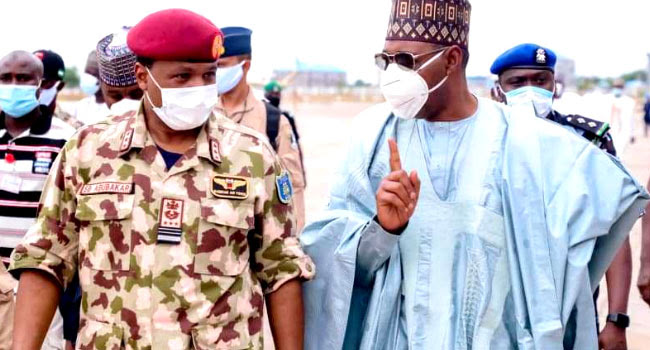 Engineers of the Nigerian Air Force (NAF) in collaboration with experts at the Ahmadu Bello University (ABU) Zaria, Kaduna State, have constructed ventilators with locally sourced materials for use in the treatment of the ravaging Coronavirus and other respiratory diseases.

Air Marshall Sadique Abubakar, the Chief of Air Staff, said on Monday in Maiduguri, Borno State, that the ventilators will soon be officially unveiled for use.  He spoke while hosting a Sallah luncheon for frontline troops of the NAF at the headquarters of Air Task Force Operation Lafiya Dole.

Abubakar said as part of its support for the fight against COVID-19, the Nigerian Air Force had also provided Personal Protective Equipment (PPEs) and ventilators to its hospital in Maiduguri, as well as distributed reusable face masks to its personnel.

He urged NAF personnel to be vigilant and ensure compliance to guidelines and protocols put in place by relevant authorities on COVID-19 which he described as an invisible enemy, while sustaining the fight against insurgency.

In his remarks, the state governor, Prof. Babagana Zulum commended NAF for its sacrifices and commitment to national security. He said efforts of the Air Force, particularly Air Task Force (ATF), had resulted in degrading the insurgents and facilitated a return to normalcy in Borno State.

Posted by adminpri - August 6, 2021 0
The Medical and Dental Practitioners Disciplinary Tribunal has suspended 12 doctors and barred three from medical practice in Nigeria