A top ranking female police officer attached to the Force Intelligence Bureau (FIB) in Abuja has been captured and whisked away by yet-to-identified gunmen to an unknown destination, triggering an uneasy calm at the Nigeria Police Force Headquarters.

Agnes Momoh, a Chief Superintendent of Police (CSP), was said to be travelling aboard a Toyota Hiace bus bearing registration number RSH 205 XC along with about 17 other persons when the gunmen emerged from the bush and attacked the vehicle with sporadic gunshots at about 4.50pm.

The incident occurred on Monday, between Mararaba Udege and Nasarawa town in Nasarawa State while the police officer and others were travelling from Oturkpo, Benue State, en-route Abuja.

Scudnews learnt that while six of the passengers escaped the onslaught, CSP Momoh and some others were unlucky. They were grabbed and dragged into the thick forest on a journey to the unknown. A witness said policemen who arrived the scene moments later, picked up 61 empty shells of 7.62mm ammunition. 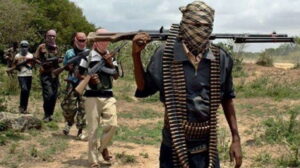 It was learnt that while the abductors of the top police officer had established contact with her family, it could not be ascertained if they placed a ransom for her freedom or made other conditional requests, but a rescue attempt by a combined team of police and local vigilante operatives at about 9:45am on Wednesday, July 1, was unsuccessful and turned fatal.

Three of the vigilante operatives were killed and two others critically injured in an ambush while ascending a hill in search of the abducted police officer and the other victims. Sources said one of the injured vigilante operatives was rushed to the Alkawari Clinic at Mararaba Udegu, Nasarawa State for treatment, where he later died.

Names of some of the vigilante operatives who were shot dead while on the ill-fated rescue mission were given as Ewa Koki, Sa’ida Alhaji Zauda, and Bamu Alhaji Afawu, while Bani Malam Yayi and Damau Alhaji Afawu were critically injured.

Security sources hinted Scudnews that the police authorities had solicited assistance from the military for a joint operation to rescue its top officer and other victims from the den of their abductors.

Amidst concerns on how only operatives of the local vigilante were felled by a hail of bullets in an ambush by the kidnappers when police personnel were part of the team on the rescue mission, Nasarawa State commissioner of police, Bola Longe, said the police made a tactical withdrawal.

“Police and vigilante personnel embarked on rescue operation and we made tactical deployment – mobile police, SARS, Counter Terrorists and conventional policemen were deployed to scout for the victims and rescue them. But suddenly, there was an ambush. That is why the job of policing is a profession that is nomadic; it has its own training that differentiates it from the training of other profession.

So, police made tactical withdrawal and those who could not do that, some of them were injured and it led to the death of two of them. I was not there with them, but the police was with them; we don’t allow vigilante personnel to go on operation alone; they are always married to the police; they go together”, he said in a telephone interview with Scudnews on Thursday.

The police chief further gave an insight on the circumstances surrounding the incident. His words:

“I was not there and we didn’t know the number of passengers that were in the vehicle. I learnt they were coming from Oturkpo. That road, the road has not been completed; the road is under construction, and we had given order that people should not be passing there, that the road should be blocked.

Because its inside a thick bush, the road between Oturpko and Nasarawa through Aweto Bridge is still under construction; but because the road is shorter than the Makurdi-Lafia-Akwanga-Keffi road, people are risking passing the place; if the road is completely open, there will be security architecture that would be placed on that road and that will safeguard the lives and property of the people.

During the lock-down, we gave directives that the road should be blocked at the end of the Aweto Bridge and it was done; so I don’t know when they opened the bridge, and when they said that people were kidnapped, I was shocked, because I didn’t know that the road had been opened.

Police and vigilante personnel embarked on rescue operation and we made tactical deployment; mobile police, SARS, Counter Terrorists, and conventional policemen were deployed to scout for the victims and rescue them. But suddenly, there was an ambush.

That is why the job of policing is a profession that is nomadic; it has its own training that differentiates it from training of other professions. So, police made tactical withdrawal and those who could not do that, some of them were injured and it led to the death of two of them.

Some people had been rescued earlier and somebody too escaped and he is giving us information and we have arrested four of the kidnappers. We are working assiduously to liberate those who are still with them and by the grace of God, with the support of the people through community partnership; we will get all of them rescued.

We are not sleeping; I am not sleeping. I am monitoring and directing the operations of our personnel and God on our side, everybody will be rescued and those who committed the heinous act will definitely pay for it. This is a country where we have laws, where there must be law and order. Anybody that wants to rupture the equilibrium of the law will definitely face the music”.