A former fighter of the dreaded Boko Haram fundamentalist sect who shed his garb and ventured into barbing, now smiles home with a sum of N250, 000 monthly, according to   Borno State Commissioner for Women Affairs and Social Development, Hajiya Zuwaira Gambo.

She said the ex-insurgent, whose identity was not disclosed, had become an employer of labour, and making progress in his business.

Gambo, who spoke at a ceremony where some former Boko Haram members denounced the sect, said the Borno State government had put in place structures to reintegrate repentant combatants in the society.

“We will provide them with psycho-social support and continue with religious admonition in order to make them good citizens of the country. We will also give them starter packs to help them practice the skills that had been acquired in the camp here”.

Six hundred and two repentant Boko Haram members, on Monday, denounced their membership of the dreaded sect and swore an Oath of Allegiance to the Federal Republic of Nigeria. 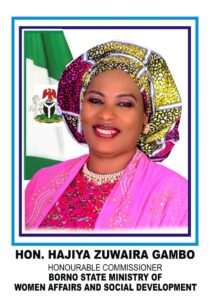 The former insurgents, who had completed a de-radicalization, rehabilitation and reintegration programme, denounced their membership of the sect at the Malam Sidi Camp in Kwami Local Government area of Gombe State.

They denounced their membership of Boko Haram before an 11-man Quasi Judicial Panel headed by Justice Nehizena Afolabi, of the Federal High Court, Gombe.

Speaking during the exercise, Major General Bamidele Shafa, the Coordinator, Operation Safe Corridor, said the appearance of the repentant insurgents before the judicial panel was a major requirement, before their reintegration into the society.

“The panel is for the clients to appear before it to confess their pasts and denounce their membership of Boko Haram, Islamic State’s West Africa Province (ISWAP) as the case maybe, and to swear Oath of Allegiance to be loyal, discipline and obedient citizens of the Federal Republic of Nigeria and then make commitment.

The commitment is that at the end of the programme, where they commit any offence, they stand to forfeit all privileges that they have acquired today and will be liable of offence against the State.”

Shafa disclosed that since the commencement of the DRR programme in 2016, it had admitted 893 clients into camp, while 280 including two Chadians had been transferred to their various national and state authorities.

In an interview with newsmen, Jasper Ukachukwu, Senior Programme Officer, Centre for Democracy and Development (CDD) said the idea of setting up the panel was to ensure some level of accountability in the DRR programme. “So that even when they step out of here, they will also be held accountable to any offence they may commit,” he said.