[vc_row][vc_column][vc_column_text]The Niger Delta Development Commission (NDDC) has warned the public against activities of fraudsters offering non-existent jobs to unsuspecting seekers.
Charles Odili, Director of Corporate Affairs, said in a statement in Port Harcourt on Monday that scammers had demanded money from unsuspecting Nigerians to obtain jobs.
“NDDC is once again compelled to alert members of the public of activities offering placements in non-existent empowerment programmes purportedly being run by the commission. We have received several inquiries from potential victims, who were deceived into believing that NDDC was currently running different training and skills acquisition programmes. The hapless job-seekers are being asked by scammers to pay some enrollment fees into fake accounts”.
Odili said that the scammers told their victims they were representatives of officials of the commission authorized by NDDC management to collate a list of contractors with jobs as well as negotiate payments.
“Members of the public should note that these dubious individuals, who impersonate NDDC officials, are exploiting the social media to carry out their nefarious activities. We advise those who have genuine business with NDDC to always cross-check their information at the commission’s official website and other social media handles.
We warn those claiming to represent the commission or its’ Chief Executive Officer in non-existent programmes to desist forthwith or they will be arrested and prosecuted”. 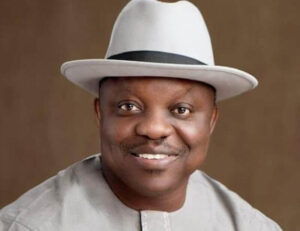 Meanwhile, a former Delta State Governor, Dr. Emmanuel Uduaghan, on Monday said the allegation linking him with a Niger Delta Development Commission (NDDC) road contract in Port Harcourt, Rivers, was false.
Uduaghan in a statement signed by his media assistant, Monoyo Edon, in Warri, urged the public to disregard the allegation as reported by the media on Monday.
According to the media report, the Minister of Niger Delta Affairs, Sen. Godswill Akpabio, had in a letter linked two former Delta governors, James Ibori and Uduaghan, to various contracts awarded by the commission.
The letter was said to have been addressed to the Speaker of the House of Representatives, Femi Gbajabiamila.
Uduaghan, an All Progressives Congress (APC) chieftain in Delta, said he had reached out to the minister to immediately correct the falsehood.
The former governor who served for two terms under the PDP before he defected to the APC, said that he had never approached the commission for any contract.
“The publication states that the former governor was linked to the contract for the emergency repair of Close B, Alhaji Estate & Environs, Rumuodomaya, Port Harcourt, at a cost of N429m. I want to state clearly that the said accusation is false. Uduaghan has never approached the NDDC for any contract whatsoever. It is even more ridiculous that the said contract is a road inside Port Harcourt town. The attention of the Minister of the Niger Delta, Sen. Akpabio, has been drawn to the publication and I hope he makes a correction”.[/vc_column_text][/vc_column][/vc_row]