[vc_row][vc_column][vc_column_text]Ahead of the October 10 Ondo State governorship election, the Peoples Democratic Party (PDP) has decried what it called ‘importation of thugs’ into Ondo state.
The PDP on its Twitter handle alledged that the thugs are masquerading as security officers with fake @PoliceNG uniforms.
It also claims they are residing in Mydas Hotel, Owo while some are with Governor Yahaya Bello in St Jacobs Hotel,Alagbaka. 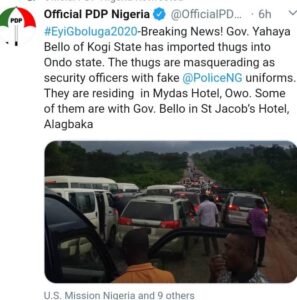 In another development, A human rights activist, Mr Bakari Mohammed, has advised electorates to desist from selling their votes, but use their power to elect visionary candidates with people-oriented programmes.
He gave the advice in an interview, on Wednesday in Abuja, saying that “vote selling and buying is capable of mortgaging the future of Nigerians”.
He added that electorates must be proactive and eliminate the alarming trend of vote buying in the electoral process.
The activist also appealed to the Independent National Electoral Commission (INEC); the Nigeria Police and relevant agencies to engage Nigerians through enlightenment campaigns to sensitise them on the dangers of vote buying and selling as according to him , vote buying is an offence under the 2010 Electoral Act.
He said the electoral law criminalised vote buying before, during and after elections.
“Vote buying is an offence under the Electoral Act 2010 which is the applicable law in Nigeria. The Act provides that any financial inducement with regards to elections amount to electoral offence”.[/vc_column_text][/vc_column][/vc_row]