Across Africa Magazine welcome to our website
Home News Rivers Youths Cry Out Over Spate of Piracy, Killings on Their Waterways

The protesters urged the government and other relevant bodies to come to their aid as piracy seemed to be gaining momentum in the area.

The recent discovery of the body of Engineer Taminoemi Kemuel, one the victims of the pirates, triggered the protest which drew a large number of the youth, women and children, as they marched with #ENDSEAPIRACY placards along the streets. 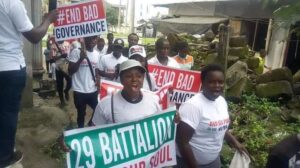 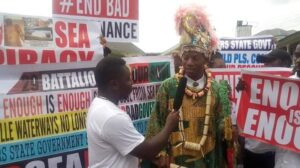 The protesters who said they do not want to take laws into their hands by taking up arms to fight; urged the government to act fast as both government and private investments in the community are under serious attack due to piracy.

One of the protesters, Prince Beleari Dokubo, pleaded with the Military to intervene when the protesters stopped by; at the 29 Battalion tactical Headquarters at Iwoama-Bille where they were informed that the commander was not as at then, present.

“As Bille people, we are fed up with what is happening on our creeks. we have come not to cause mayhem but for us to tell the military our pain as Bille people”.

According to him,”we are Nigerians and in just a few months, we have lost more than 20 Bille youth who are married with families. We are tired and as respecters of the law, we cannot carry arms today before the military to go and defend ourselves. We are therefore appealing to the military assigned to us. It is clearly stated that they are charged to take care of pipeline products and personality. When there is no peace in a land, there is no property you can take care of. We are not stupid but are well educated but we cannot travel to our community conveniently neither can we travel to Portharcourt to get food to eat and therefore we are appealing to the personnels to respond to our cry”.

The youth marched from Bille town through Touama, Jikeama, Opu Billeboko, Imopeleama, Gogoama and to the flow station Bille 1, the OML 18 site and NNPC in Bille Kingdom.

When contacted, the Rivers State Police Command Spokesperson, Omoni Nnamdi, confirmed there was a reported case of sea piracy on the Bille/Bonny waterways about a week ago.
“There was a reported case about sea pirates about one or two weeks ago and on receipt of that report, we immediately mobilized our marine police and we deployed gunboats to complement the effort of the Navy who were already on ground then. Because of the fact that there were only five serviceable gunboats in the command, we deployed our gunboats judiciously to ensure that other areas are not left porous. For this particular incident, we have responded and we are still on the trail of the attackers.

He, however, said they need the cooperation of the communities, “the community should be able to assist us with information, especially information that will lead to the arrest of the boys. We do not know them, they come from the blues and launch the attacks and immediately disappear. If we have credible information, we can arrest them” he added.