He further added that now that the “president’s men” want the service chiefs removed, the President has decided to abide by their initial advice. 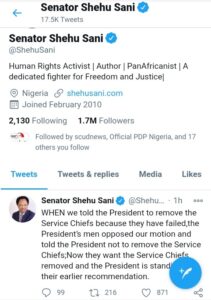 Posted by adminpri - July 14, 2021 0
President Muhammadu Buhari says Nigeria is a lucky country and Nigerians should congratulate themselves despite facing challenges

COVID-19, Not Threat to Our Convention -Apostolic Church President