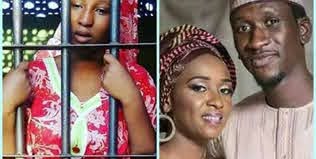 The Court of Appeal in Abuja, on Friday, upheld the conviction and death sentence that was handed to Maryam Sanda, daughter-inlaw to a former Chairman of the PDP, Mohammed Haliru.

Delivering judgment, Justice Stephen Adah, who read the decision on behalf of the three-member panel of justices held that the trial judge was right in his decision.

“I have gone through the record before the court and I am fully certain that the learned trial court did not engage any investigation outside the evidence before it. The appellant did not point out where the trial judge went out of the scope of his duties to carry out an investigation”.

He said the word “investigation” used by the lower court was “taken out of context” by the appellant.

The judge also held that ingredients of the offence were clearly established as it is required.

He held that “…where there are no organic facts leading to get the cause of death, circumstances surrounding the death can be the best proof of what is being alleged in a case”.

He added that the trial court rightly considered the facts and circumstances of the case before it concrete enough to secure the conviction of the appellant.

Sanda and three others were arraigned on a two-count charge bordering on culpable homicide.

She was convicted and sentenced to death by hanging on January 27, 2020, by Yusuf Halilu, the trial judge.

Halilu held that “She should reap what she has sown, for it has been said that ‘thou shall not kill’ and whoever kills in cold blood deserves death as his own reward. Convict also clearly deserves to die, accordingly I hereby sentence Maryam Sanda to death by hanging until she dies”.

Aggrieved by the death sentence, Sanda approached the appellate court, seeking to upturn the judgment.

In a notice of appeal predicated on 20 grounds, the appellant through her legal team described the judgment of the trial court as “a miscarriage of justice”.

She submitted that the judge relied on circumstantial evidence as there was “lack of confessional statement, absence of murder weapon”.

She added that there was lack of corroboration of evidence by two or more witnesses and lack of autopsy report to determine the true cause of her husband’s death”.

She also submitted that the trial judge “erred and misdirected himself by usurping the role of the police when he assumed the duty of an investigating police officer (IPO) as contained in page 76 of his judgment”.

Posted by adminpri - July 7, 2021 0
Twelve students were on Tuesday, convicted by a Federal High Court in Enugu, on charges bordering on forgery, impersonation and…