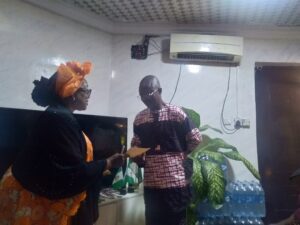 A philanthropist, Chief Temitope Ajayi, has given out the second tranche of interest-free loans worth N10.5million to victims of EndSARS protest in Lekki, Lagos.
Ajayi, Chief Executive Officer, Silicon Valley Nigeria Economic Development, while giving out the money on Monday in Lekki, Lagos, said the beneficiaries who were faithful in paying up their initial loans got double the amount in the second tranche of the facility.
The philanthropist, who gave out the first tranche of the loan three weeks ago, expressed delight over the beneficiaries’ commitment towards being financially self reliant and responsible citizens of the country.
She said each of the more than 200 EndSARS victims got a loan of between N40,000 and N80,000, depending on the kind of investment they chose to engage in.
According to her, those that got N20,000 before received N40,000 and were also given prizes like umbrellas, food warmers and more.
”I was moved by the sufferings of young Nigerians as a mother, I decided to reach out to my children and friends in the diaspora to help assist these youths to be financially self reliant. Thank God they gave me some money and I have been able to do this and I pray, these contributors will never lack. Before giving out the loans, we engaged them in business development training to enable them thrive in their various businesses. The entire gesture was done by Silicon Valley Cooperative Multipurpose Society in partnership with Global Connection for Women Foundation (GC4W) and Masterplan Finance UK Ltd, specially designed for the EndSARS Nigerian young adults. Our goal is to heal and revive Nigeria through helping the youths, empowering them and saving the country from destruction”.
Ajayi said some of the beneficiaries opted to sell prepared Noodles, food, recharge card, egg sellers while others were artisans.
One of the contributors, Mr Barry Baruwa, congratulated the beneficiaries, urging them to remain patient, resilient and hard-working to make remarkable success in their businesses.
He called on Nigerians in the diaspora to assist the less privileged in the country in order to make them self sufficient.
”Nigerian government need to provide the basics, this is when people will stop depending on the government for survival”.

Chief Temitope Ajayi giving out the loan to a beneficiary, Arnold Kenfack, who was brutalised by the Special Anti-robbery Squad
One of the beneficiaries, Arnold Kenfack who was once brutalised by the disbanded Special Anti-robbery Squad (SARS), said he got involved in the protest due to his previous sufferings in the hands of the police.
Kenfack appreciated the kind gesture extended to him as he now earns N4,000 daily through sales of Indomie noodles.
”Mama has been a great support system to me and my family, I have learned not to depend on government and people around me but to focus on working hard to fend for myself. I have had terrible experiences with the SARS in the past, I was once arrested just for having foreign numbers on my phone who are my relatives abroad, it was a bitter experience for me”.
Also, Mrs Mary Kolawole, a homeless mother of three, expressed excitement over the fact that she was engaged in a business that enabled her to save conveniently.
Kolawole urged more Nigerian philanthropists, government and corporate organisations to help the less priviledged across the country in order to reduce crime rate and other social vices.