Across Africa Magazine welcome to our website
Home News Bandit Attack: Masari Orders Closure of all Boarding Schools in Katsina 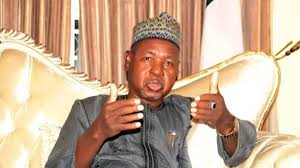 Governor Aminu Masari of Katsina State has ordered the immediate closure of all boarding secondary schools in the state.

The governor gave the directive in a statement by his Director-General on Media, Mr Abdu Labaran, on Saturday in Katsina.

Masari, according to Labaran, gave the directive followed the alleged abduction of some students of the Government Science Secondary School (GSSS) Kankara by bandits in the night on Friday.

He spoke on Saturday when he visited the school in company of his Deputy, Mannir Yakubu, other government officials, some parents, traditional and religious leaders as well as security officials.

Masari, who could not control his emotions, pleaded with the people to be patient and show restraint and understanding, assuring them that government would do every necessary thing to ensure the release of any abducted students.

He said that already, the military, the police and the Department of State Security had swung into action and were on the trail of the bandits.

Masari further assured them that both the Federal and state Governments were doing their bests to bring an end to banditry and other debilitating criminal activities in the state.

“The government is very firm in its resolve to be ruthless in any engagement with the bandits,” he said.