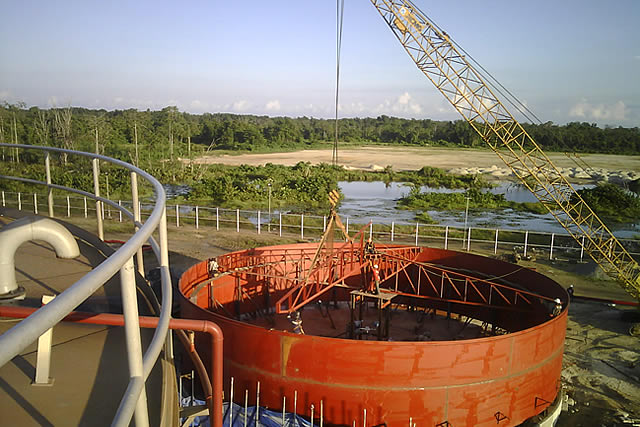 The Olu of Warri, Ogiame Ikenwoli, has appealed to President Muhammadu Buhari to begin work on the US$16-billion Ogidigben gas project in Warri South-West Local Government Area of Delta.

Ikenwoli made the appeal on Saturday during his fifth anniversary celebration of his coronation held at the Olu of Warri Palace in Ajamimogha, Warri South Local Government Area.

The ground-breaking ceremony of the Gas Revolution Industrial Park/EPZ Project in Ogidigben was performed by former President Godluck Jonathan in 2015.
The Olu of warri said the project would have a multiplier effect on the socio-economic development of the country.

“Again, this is a project that is dear to us as a people. This is more so as it is of immense benefit to the nation, in terms of gas utilisation, instead of flaring and wasting such critical money-spinning asset. When the groundbreaking ceremony was done in January 2015, our hopes were very high for the nation at large. Since then, not much has been done”.

He also appealed to the Minister of Transport, Rotimi Amaechi, to complete the process of dredging the Escravos bar to revamp activities in the Warri and Koko ports.

The Olu of Warri commended the Federal Government for the progress of work done on the Koko-Ogheye road which would reduce the hours of travelling to Lagos from Delta.

He described his celebration as a significant milestone and promised to sustain the existing peaceful relationship with Itsekiri neighbours, including the Ijaws, Urhobos and Ilajes.

He warned: “No human needs, wants, demands or ambition is worth the blood of any of our people. We, therefore, stand ready and prepared to do all that we can to continue to promote peace and contribute to security of lives and national assets in our kingdom”.

The ceremony featured colourful traditional dances and paying of homages by chiefs, several Itsekiri groups, from both home and abroad, including the Ologbotsere Descendants.

Posted by adminpri - August 4, 2021 0
No fewer than 300 staff of the NSITF have been redeployed across various sections, departments and regions of the federation.