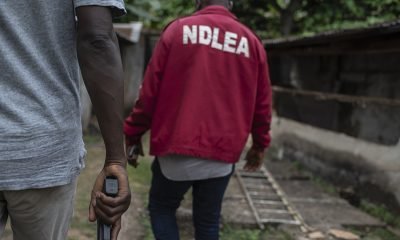 A 27-year old man, Seun Alalade has been sentenced by a Federal High Court in Lagos, to 18 months in prison for peddling in cannabis sativa weighing 1.15kg.

Alalade, a trader, was charged by the National Drug Law Enforcement Agency (NDLEA) on one count of drug trafficking before Justice Chuka Obiozor.

He, however, pleaded guilty to the offence.

After his plea, the Prosecutor, Mr Jeremiah Aernan, reviewed the facts of the case before the court and tendered some documents as evidence.

The documents include: a written statement of the defendant, a drug analysis form, a request for scientific aid form and remnant of the narcotic.

The court admitted the documents in evidence and marked them as exhibits.

Aernan then urged the court to convict and sentence the defendant based on his plea as well as evidence adduced by prosecution.

In his verdict, Justice Obiozor found Alalade guilty of the offence and accordingly convicted him.

He sentenced him to 18 months imprisonment from the date of his arrest, with an option of N50, 000 fine.

The prosecutor had told the court that the convict was arrested on July 21 on a tip-off at the Ijegun area of Lagos while unlawfully engaging in the sale of cannabis sativa weighing 1.15kg.

According to him, cannabis is a narcotic drug similar to cocaine, heroin and LSD, and trafficking in same contravened Section 11(c) of the NDLEA Act, CAP N30 Laws of the Federation, 2004.

N11.5B Fraud: Alao-Akala, Others Have Case To Answer – Court

Posted by adminpri - July 15, 2021 0
He, however, discharged Alao-Akala on the charges of acquiring property with money allegedly derived from an illegal act and concealing.

Posted by adminpri - June 10, 2021 0
Some Lawyers in Osun State on Thursday urged the Federal Government to deduct funds meant for state judiciaries from the…

Posted by adminpri - July 12, 2021 0
National Industrial Court of Nigeria (NICN), Abuja received 102 cases in the first quarter of 2021. Aminu Ibrahim made this…