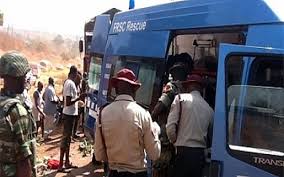 The Niger State Command of the Federal Road Safety Corps (FRSC) has confirmed the death of two persons with seven others injured in an accident along Mokwa-Jebba Road.

“12 people were involved in the mishap; two were killed, 7 sustained various degrees of injuries and were taken to Mokwa General Hospital for treatment, while the two corpses were deposited in Mortuary”.

He explained that the truck from Kontagora was loaded with cows and was on its way to Lagos when the driver lost control due to speeding.

The sector commander advised motorists to exercise caution and adhere strictly to speed limits to avoid crashes and gave assurance that the Corps would continue to monitor road users to guard against dangerous driving.

“We will continue to sustain our aggressive patrols across all major highways to ensure that road users adhere strictly to traffic rules and regulations to avoid road accidents during and after the Yuletide”.[/vc_column_text][/vc_column][/vc_row]