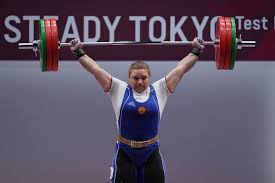 Kashirina, who won silver at the 2012 Olympics and five gold medals at the world championships between 2010 and 2018, was one of the favourites for a gold medal at next year’s Tokyo Games.

The report said Kashirina, 29, was suspended after the World Anti-Doping Agency (WADA) took results of doping tests of Russian athletes between 2012 to 2015 from the Moscow Laboratory during an investigation.

She previously served a two-year suspension from 2006-2008 for violating anti-doping rules and her latest ban will prevent her from competing during the Games qualification period which runs until April, 2021.

Kashirina would have had to compete as a neutral as Russian athletes remain barred from major international events, including the Olympics, under the country’s flag until 2022.