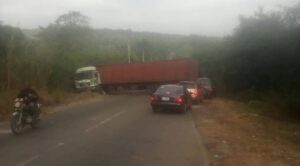 A midde-aged man has been confirmed dead in an accident involving three vehicles along Nnewi-Nnobi road, Nnewi, Anambra State.

Mr Andrew Kumapayi, the Sector Commander of the Federal Road Safety Corps (FRSC) in Anambra, confirmed the incident in Awka on Tuesday.

He said the accident occurred at about noon and that the crash was as a result of overloading of an articulated vehicle.

He said a total of six male adults were involved in the accident while one of them died in the crash.

“The crash involved a trailer without a registration number, a tanker without a registration number and a bus with registration number AA904JJT. The driver of the trailer conveying crates of drinks lost control of the vehicle while climbing a hilly area of the road, jackknifed and blocked the road. The tanker and the bus conveying passengers rammed into the jacknified trailer. Out of the six male adults involved in the crash, two persons sustained some degree of injuries and were taken to Our Ladies Hospital, Umuoji in Nnewi by FRSC rescue team from Nnewi command. Another who was a passenger in the bus was confirmed dead by doctors and his body was deposited at the morgue”.

While condoling with the family of the dead, Kumapayi urged motorists to avoid overspeeding and overloading of their vehicles.

He also advised motorists to concentrate while driving to avoid crashing into stationary vehicles.[/vc_column_text][/vc_column][/vc_row]