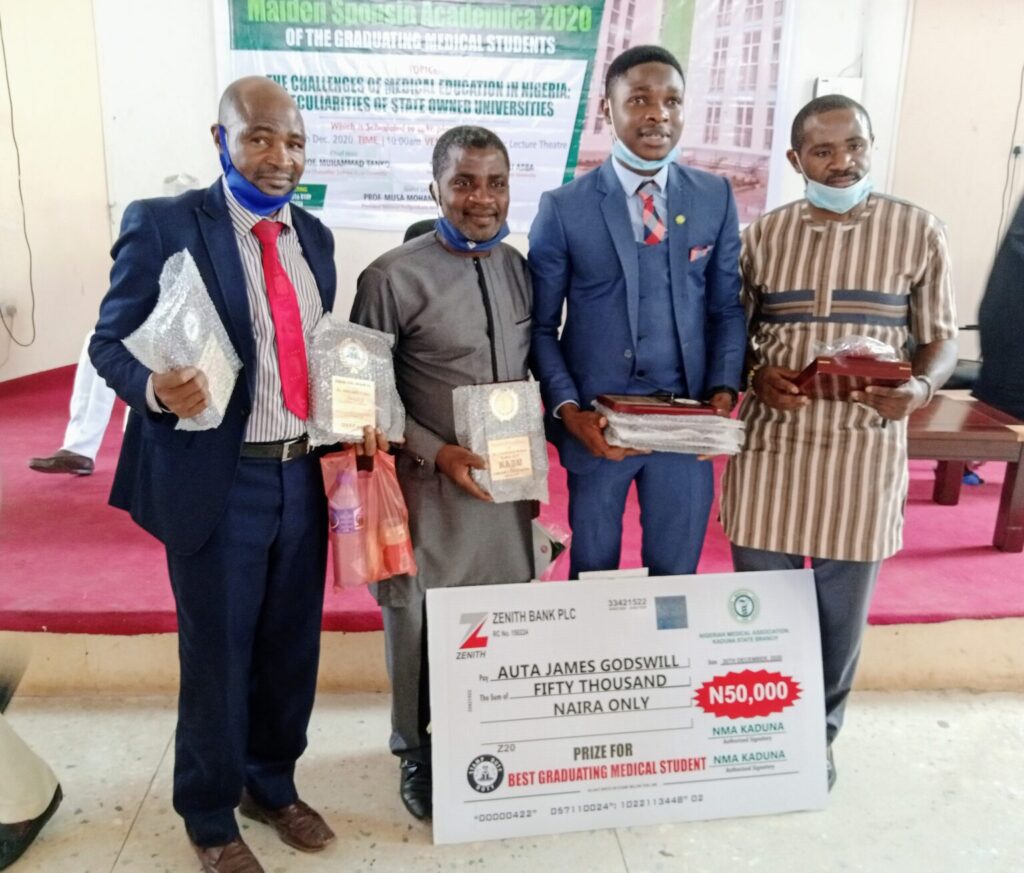 Auta on Thursday in Kaduna, said his son, the third and only surviving child of the family, had “continued to amaze everyone”.

Auta received seven out of the 15 prizes presented during the maiden induction and oath-taking ceremony of the first set of 50 medical doctors graduated by KASU on Wednesday.

The excited father said Godswill had been very smart right from his tender age.

“He was prudent and never demanded for more than he needed. He dazzled me with how much he knew at a very tender age. Godswill is just a miracle, a wonderful son, and a gift from God. I was able to support him through this journey because I am a civil servant, a hustler, and a farmer, but the journey, the financial stress and the endless waiting for this day to come have not been easy. The financial commitment was much; I don’t know his phone number, but I know his account details. I give God the glory for seeing us through”.

Sharing his experience, Godswill described the journey, which began in 2011 as “very challenging”.

“It tasked practically everything – my patience, my endurance and my determination. There were times I wondered if I was ever going to graduate due to the series of hurdles that were generally outside my control. There was the problem of accreditation and stagnation. At a point I got mentally exhausted. But now that the coast is clear, I can see endless possibilities ahead of me. I want to say that the turbulent journey has been a worthy experience, and the good thing is that the destination seems beautiful”.

Godswill ascribed his success to God, stressing that no one could have amounted to anything without God’s help.

He said he could not remember ever missing a class on account of ill health.

He thanked his teachers who taught him everything he knew and his family and relations who stood by him and supported him financially, materially and emotionally.

“Another reason behind my feat is my classmates, particularly my reading mate, Dr Patience Timothy. They have been very inspiring. My advice to other students is simple – work hard, be determined and be consistent”.

“The journey was rough and turbulent, but hard work got us to the finishing line. We were not the most brilliant or smartest students in the class, but we were consistent and did what needed to be done, when it should be done, and it has yielded the desired result in the long run. My deceased parents encouraged me greatly to put in my best and God gave me a wonderful husband that kept pushing me to study hard, even when I felt like giving up”.

Timothy said her greatest challenge was stagnation when they had to spend three years in the same class, stressing that it was financially demanding, academically stressful, emotionally tasking and psychologically discouraging.

“Another challenge was when I lost my mother. I was thrown off balance. There were times when I broke down and cried in the hostel, at home, and in the classroom. But God helped me and I pulled through. He has remained my source of strength”.

Her husband, Mr Abel Peter, described Patience as a “strong woman”, who had consistently grown from strength to strength.

“One moment I won’t forget is when she wrote one of her examinations while in the labour room and emerged top in the course. It is just fascinating seeing how her mind works and how strong she is. Her father died about 13 years ago, and the mother, who was her major pillar, also died two years ago, barely two months to our wedding. But she was still able to pull through and moved on. She is a woman with a strong will”.