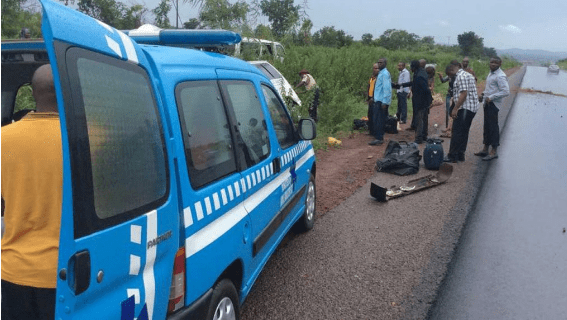 The Federal Road Safety Corps (FRSC) has said one woman died while three children sustained various degree of injuries in a road accident on Gbogan -Ibadan highway on Thursday.

The FRSC Sector Commander in Osun, Mrs Kudirat Ibrahim, disclosed this in a statement by the command spokeswoman, Mrs Agnes Ogungbemi in Osogbo.

Ibrahim attributed the cause of the accident to dangerous driving and speeding without adherence to road traffic regulations by the motorists involved.

According to her, the accident occurred on Gbongan -Ibadan highway, 23km away from Sasa bridge, Ikire.

The commander said the three children, who sustained various degree of injuries and shock, were given first aid treatment by the FRSC Ambulance team.

Ibrahim said the body of the woman has been deposited at the mortuary in OAU Teaching Hospital Ile Ife.

“All items found in the vehicles were handed over to the Nigerian Police Force Ikire. The items include a black bag containing some personal effects, a brown suitcase, food items and a black purse containing a driver’s licence, first Bank ATM card and a sum of N18,610”.

The sector commander called on road users to comply with road safety regulations to avoid any unwanted situations which may lead to death.

Ibrahim, however, said safety on highways was a shared responsibility which must not be left in the hands of the corps alone, adding that everyone must be self conscious while using the road.

Posted by adminpri - July 1, 2021 0
Kano State Road and Traffic Agency (KAROTA) has increased tricycle license permits from N8,000 to N100,000.https://scudnewsng.com The Managing Director of the…