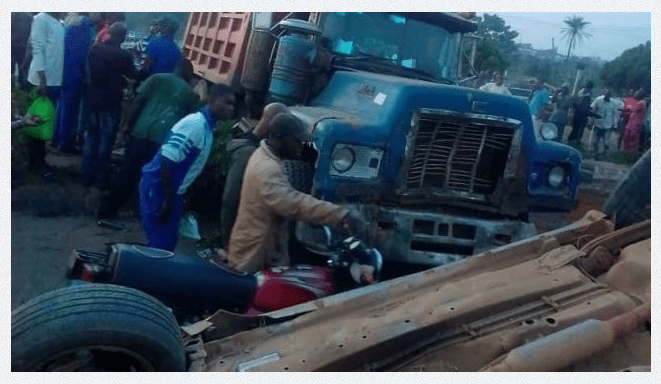 Six persons were confirmed dead while nine others sustained various degrees of injuries on Tuesday in a ghastly accident involving an articulated vehicle and a Toyota bus around Car Park C on the Lagos-Ibadan Expressway.

Umar explained that the accident which occurred around 11:53am, was caused by the driver of the truck marked FZE 376 DI who drove recklessly, loss control and hit the bus with registration number ZUR 843 XA from the rear.

He said the driver of the bus immediately lost control and the bus summersaulted adding that 20 people were involved in the accident which comprised 16 male adults, three female adults and one male child.

The sector commander explained that five male adults and one female adult died in the accident, while seven male, one female and one male child were injured.

He said the driver of the truck tried to escape but was caught and taken to MTD Redeemed Police Division, Mowe.

The FRSC boss noted that the injured persons were taken to Olabisi Onabanjo University Teaching Hospital (OOUTH), Sagamu and Idera Hospital in Sagamu adding that the corpses of the deceased were taken away by their families for burial in accordance with Islamic rites.