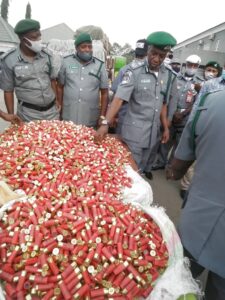 The controller said during the exhibition that the seizures were made between November 23 and December 27, 2020.

Giving a breakdown of the items, Yusuf said the Duty Paid Value (DPV) of the live ammunition was N3 million, while the DPV of the foreign rice was N36 million.

He added that the DPV of the bullet proof Landcruser and other three vehicles seized during the period was N221 million.

He said 38 ‘Jumbo Bales’ known as used clothes worth N3 million were also intercepted during the period under review.

On general merchandise, the controller said 204 foreign tin tomatoes, pharmaceutical products and others worth N115 million were intercepted.

Yusuf disclosed that N7 million was recovered from a Demand Notice (DN) on 3X40ft containers which, he said, was as a result of wrong declaration and transfer of value.

“The live ammunition was intercepted along Nwezenyi Ikom road in Cross River, while the 1,215 bags of rice were intercepted on Okada road in Edo and the tomatoes and pharmaceuticals were intercepted along Onitsha Enugu expressway. Today, I’m elated to inform you that after reflecting and reviewing our operational modalities toward sustaining our statutory mandate of anti-smuggling operations, we have intercepted various contraband. On assumption of duty, I held series of meetings with my sectional heads, where we unveiled the management mandate which includes blockage of all revenue leakages and amplification of ant-smuggling operations”.

He noted that the said total amount of DPV and DN of the seizures made during the period was N386 million.

Yusuf said the activities of smugglers were a great sabotage to Nigerian economy.

“Considering the level of insecurity in the country, if these live ammunition were not intercepted, the country would have been in trouble. These seizures were made since I took over as the Controller, Federal Operations Zone ‘C’; we will not give up the fight against smuggling in the country”.

He commended the Comptroller-General of Customs for giving them the will power to continue to fight against smuggling and warned smugglers to henceforth stop illegal importation of goods into Nigeria, adding: “The unit is ready to fight them to standstill”.

Reps to Investigate Award of N19.2bn Contract to non-Existent Company