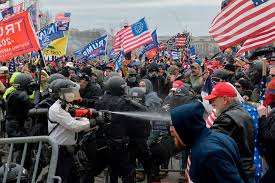 Nonetheless, many also said they had faith in the resilience of the nation’s democratic institutions.

“Democratic votes must be respected,” Sassoli wrote in a tweet, adding: “We are certain the U.S will ensure that the rules of democracy are protected”.

“In the eyes of the world, American democracy tonight appears under siege. This is an unseen assault on U.S. democracy, its institutions and the rule of law,” he wrote on Twitter. This is not America. The election results of November 3 must be fully respected”.

Canadians are “deeply disturbed and saddened” by the events in Washington DC, Prime Minister Justin Trudeau said, calling the storming of the Capitol an “attack on democracy in the United States”.

“Violence will never succeed in overruling the will of the people,” Trudeau tweeted on Wednesday evening.

In the U.S, Secretary of State Mike Pompeo condemned the “unacceptable” storming of the Capitol. “Lawlessness and rioting — here or around the world — is always unacceptable”.

“It is a sickening and heartbreaking sight. This is how election results are disputed in a banana republic – not our democratic republic. I am appalled by the reckless behavior of some political leaders since the election and by the lack of respect shown today for our institutions, our traditions, and our law enforcement,” he said in a statement tweeted by The Bush Center.

Bush’s predecessor Bill Clinton said the Wednesday’s assault “was fueled by more than four years of poison politics spreading deliberate misinformation, sowing distrust in our system, and pitting Americans against one another.

“The match was lit by Donald Trump and his most ardent enablers, including many in Congress, to overturn the results of an election he lost”.

Fellow Democratic former president Barack Obama called the Wednesday violence “incited” by Trump “a moment of great dishonor and shame for our nation”.

He told Republican leaders they had a choice: “They can continue down this road and keep stoking the raging fires. Or they can choose reality and take the first steps toward extinguishing the flames”.

NATO Secretary General Jens Stoltenberg said the scenes unfolding in Washington were shocking. “The outcome of this democratic election must be respected,” he wrote on Twitter.

British Prime Minister Boris Johnson spoke of “disgraceful scenes in U.S Congress”. In a tweet, he pointed out that “the United States stands for democracy around the world and it is now vital that there should be a peaceful and orderly transfer of power”.

“The Irish people have a deep connection with the United States of America, built up over many generations. I know that many, like me, will be watching the scenes unfolding in Washington DC with great concern and dismay,” Irish Prime Minister Micheal Martin wrote.

Nordic leaders condemned the violent scenes. “Every moment now brings a new impossible from Washington: there is an incredible nightmare of democracy going on. It is encouraging that there are those who show responsibility beyond party lines,” Finnish President Sauli Niinisto tweeted.

Austria’s federal president, Alexander Van der Bellen, was one of several European officials to express their concern at the violence.

“It is with deep concern that I watch the populist, anti-democratic attack on the Capitol in #Washington, the heart of U.S democracy,” Van der Bellen tweeted.

In a tweet, French Foreign Minister Jean-Yves Le Drian wrote: “Violence against American institutions is a serious attack on democracy. I condemn it. The will and vote of the American people must be respected”.

Italian Prime Minister Giuseppe Conte said: “I am following with great concern what is happening in #Washington. Violence is incompatible with the exercise of political rights and democratic freedoms. I trust in the solidity and strength of the institutions of the United States. #CapitolHill”

Greek Prime Minister Kyriakos Mitsotakis tweeted that he was “extremely troubled by the violence and horrible events taking place in Washington D.C.” But he also sounded an optimistic note: “American democracy is resilient, deeply rooted and will overcome this crisis”.

In a Twitter post, Polish President Andrzej Duda meanwhile said violent protests are an “internal affair” of the U.S but added: “Poland believes in the strength of the American democracy”.

Australian Foireign Minister Marise Payne was “concerned” by scenes at the U.S Congress.

“I condemn any violence to interfere with democratic processes. This will not impede the transfer of power, U.S institutions are robust & its democratic strength resides in the full breadth of its people who are no part of this violence,” she tweeted. (dpa)[/vc_column_text][/vc_column][/vc_row]