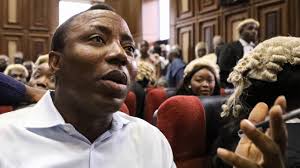 A Wuse Zone II Magistrates’ Court, Abuja on Monday, admitted Omoyele Sowore, the publisher of Sahara Reporters and leader of #RevolutionNow movement, bail to bail in the sum of N20 million.

The court also admitted Peter Williams, Sanyaolu Juwon, Emmanuel Bulus and Damilare Ademila who were arraigned with Sowore, to bail on liberal terms in the sum of N1 million each.

As part of the bail condition for Sowore as granted by Chief Magistrate Marble Segun- Bello, she ordered that one of his sureties must be a Federal civil servant on not less than GL 12.

Segun-Bello in addirion ordered that Sowore must report to the Chief Registrar’s office every Monday and Friday until the determination of the case.

Furthermore, the Magistrate directed that Sowore must remain in Abuja, and said, failure to comply with all the bail conditions would lead to the revocation of his bail and adjourned the matter until February 5 for hearing by 11am.

Sowore and the others were arraigned on January 4 on three-count charge of criminal conspiracy, unlawful assembly, and attempting to incite others.

The defendants were arrested by the Special Weapons Tactical Team in Gudu, Abuja while protesting on December 31,2020.

According to the prosecution, the defendants were seen carrying placards calling for a violent revolution. They however, all pleaded not guilty to the three count charges preferred against them.

Following their not guilty plea, prosecuting counsel led by James Idachaba prayed the court for their remand at the Kuje Correctional Center as investigations into the charges were ongoing.

However, the defendants’ counsel, Marshal Abubakar, attempted to make an oral application for their bail, urging the court to grant them bail on self recognition.

She had however scheduled for ruling on January 8 after entertaining arguments on the bail application filed by counsel on January 6.

However, on January 8, the court could not deliver the bail ruling as the defendants were not produced in court.

Posted by adminpri - July 12, 2021 0
A circular from the Chief Judge of the Court, Justice John Tsoho, said the vacation would end on September 17.

Posted by adminpri - August 24, 2021 0
Secondus has been under increased pressure of late, with demands for his resignation coming from various quarters.

Posted by adminpri - August 11, 2021 0
The Ogun State chapter of the Judiciary Staff Union of Nigeria (JUSUN) on Wednesday commenced an indefinite strike over shortfall in payment…

Posted by adminpri - June 18, 2021 0
There was bedlam at the High Court of Justice, Warri, Delta State on Thursday, as a mob invaded the court…