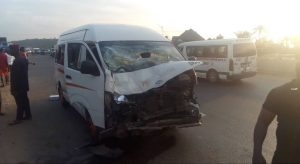 The Federal Road Safety Corps (FRSC) has confirmed that 13 persons died, while 14 others sustained various degrees of injury in an accident on Bida/Mokwa road in Niger, on Tuesday.

Mr Joel Dagwa, FRSC Sector Commander in the state, who confirmed the figures to the News Agency of Nigeria in Minna said the accident occurred at about 6.30 a.m at Panti village.

“Twenty seven people were involved in the accident 13 died, while 14 others who sustained injuries had been taken to Federal Medical Centre, Bida and General hospital, Kutigi, for treatment”.

The sector commander blamed the accident on fatigue, leading to loss of control.

Posted by adminpri - July 6, 2021 0
The Department of Petroleum Resources (DPR) has sealed off 103 filling stations and 13 Liquefied Petroleum Gas (LPG) plants in…

Posted by adminpri - June 3, 2021 0
Niger Delta Youth Council (NDYC) has urged the Federal Government to inaugurate the Governing Board of the Niger Delta Development…