Across Africa Magazine welcome to our website
Home Foreign News Two Capitol Officers Suspended, 15 Others Under Investigation for Conduct During pro-Trump Mob Protest 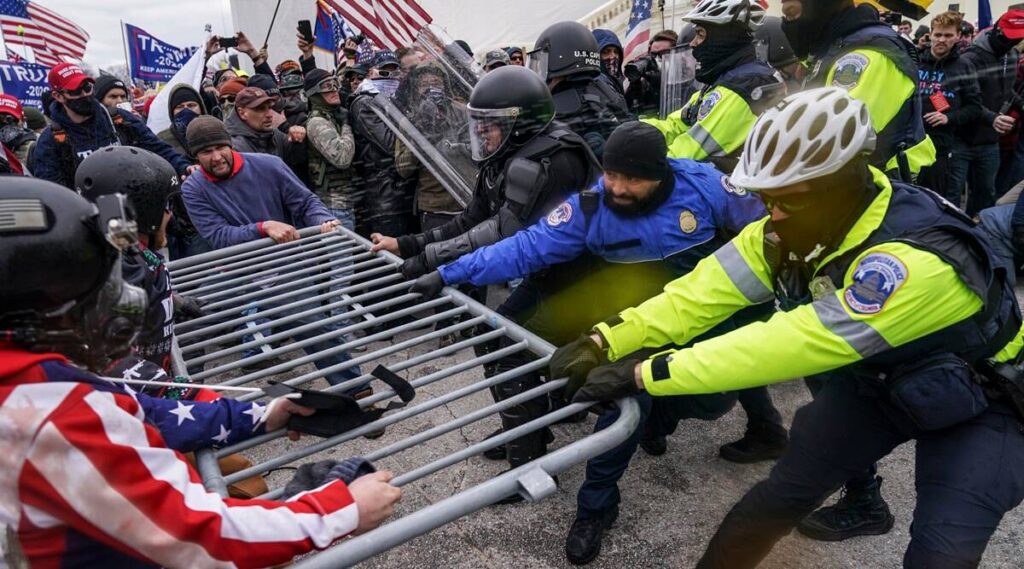 Democrats in the U.S House of Representatives introduced an article of impeachment against outgoing President Donald Trump on Monday, as Republicans blocked a measure calling on Vice President Pence to remove his boss from office.

The single impeachment article charges Trump with incitement of insurrection.

It accuses him of stoking violence against the U.S government after a mob of his supporters, riled up by his claims of election fraud, stormed the U.S Capitol last week.

Democrats also introduced a resolution urging Pence to invoke the Constitution’s 25th Amendment and strip Trump of his powers by declaring him unfit to perform his duties.

House Republicans rejected the bill, paving the way for a vote in the full House on Tuesday.

House Speaker Nancy Pelosi said that by blocking the measure, Republicans were “enabling the president’s unhinged, unstable, and deranged acts of sedition to continue”.

“Their complicity endangers America, erodes our Democracy, and it must end,” she said in a statement.

If Pence refuses to act, as is expected, House Democrats have vowed to quickly move ahead with impeachment proceedings.

The House could vote as early as mid-week.

The impeachment article notes that Trump repeated debunked claims that he won the November election in a speech before the deadly assault on Congress, which temporarily halted a joint session to certify President-elect Joe Biden’s election victory and forced lawmakers to go into hiding.

The article also cites Trump’s pressure on officials in the U.S state of Georgia to “find” him more votes in an effort to overturn his election defeat.

“In all this, President Trump gravely endangered the security of the United States and its institutions of government,” the resolution reads.

“He threatened the integrity of the democratic system, interfered with the peaceful transition of power, and imperiled a coequal branch of government,” it added.

Trump, who has only eight days left in his term, could become the first U.S president to be impeached twice.

He was impeached in 2019 on allegations of abusing his position, but the Republican-controlled Senate cleared him of charges last year.

If the Democrat-led House voted to impeach the Republican president again, a trial would then be conducted in the Senate, where a two-thirds majority would be needed to convict him.

Few Republican lawmakers have so far publicly voiced their support for the moves.

There will almost certainly be no outcome before January 20.

If convicted, Trump could be barred from running for office again in 2024.

In the aftermath of the attack on the Capitol, Trump eventually promised an orderly transfer of power on January 20, the day of Biden’s inauguration.

Mayor Muriel Bowser on Monday urged people to stay away from the city on the day of the inauguration, while the National Park Service will suspend Washington Monument tours.

Two Capitol police officers have been suspended for their behaviour as the pro-Trump mob stormed the building, U.S Congressman Tim Ryan told reporters on Monday.

Ryan said between 10 and 15 other officers were under investigation.

Meanwhile, Trump approved an emergency declaration for the U.S capital that runs from January 11 until January 24 – four days after the inauguration – and authorises the Department of Homeland Security and Federal Emergency Management Agency (FEMA) to coordinate with local authorities.

Biden on Monday said he was “not afraid” to take the oath of office outside.

According to CNN, the incoming president also told a journalist that he is hopeful that the Senate can hold an impeachment trial while at the same time confirming his cabinet nominees and passing a coronavirus stimulus package.

U.S first lady Melania Trump on Monday broke her silence on last Wednesday’s violence, saying she was “disappointed and disheartened with what happened”.

She added that her heart went out to those who had died since the attack, first naming the deceased rioters and then the two Capitol police officers.

The first lady did not reference her husband’s role in egging supporters on to march to the Capitol.

Secretary of State Mike Pompeo, a long-time Trump loyalist, said he was hopeful that the “criminals” who engaged in the rioting would be “brought to justice swiftly”.

“Law and order, not mob action, is how American democracy is sustained,” he tweeted from his personal Twitter account. (dpa)[/vc_column_text][/vc_column][/vc_row]