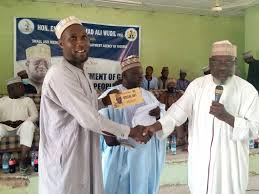 The Federal Government has disbursed N10,000 grant each to 258 beneficiaries in Wudil/Garko Federal Constituency of Kano State as part of efforts to fight poverty among the unemployed at the grassroots.

The fund disbursement which took place on Thursday in Wudil Local Government was through the Small and Medium Enterprise Development Agency of Nigeria (SMEDAN).

Aminu said the gesture was to reduce the hardship most of the people with small businesses encountered as a result of the COVID-19 pandemic.

In his own speech, Ali-Wudil said the support was aimed at empowering the unemployed youths to establish or boost their businesses adding that one of the major agendas of President Muhammadu Buhari was to fight unemployment among the youth.

“Since his assumption of duties, he has focused more on empowering the youths so that they can be self reliant. It has, therefore, become necessary for us to support him. We have empowered many people in my constituency, especially the youths and party members. Recently, we empowered over 500 executive committee members, party leaders, 350 women and other constituency members,” Ali-Wudil said.

He said arrangements were ongoing to also provide support for students of Wudil and Garko studying in various tertiary institutions across the country.

Ali-Wudil lauded the Federal Government for providing the SMEDAN grant, saying it would go a long way in reducing the economic challenges of the beneficiaries.

Hamisu Umar, one of the beneficiaries, said the gesture would help him to boost his small business.

Mairo Hamisu, another beneficiary, described the support as a welcome development as it would enable him establish his own businesses rather than depending on others.

Posted by adminpri - August 5, 2021 0
Sanwo-Olu said that the state government remained determined to rewrite the narrative of waste management in Lagos State for the…