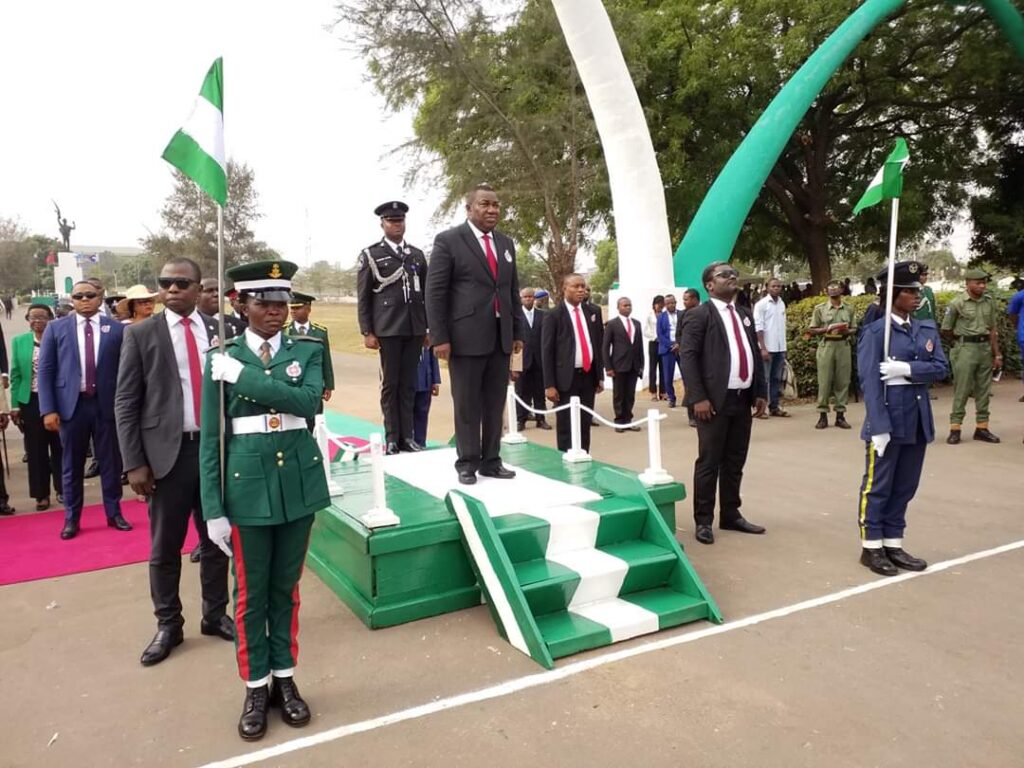 Governor Ifeanyi Ugwuanyi of Enugu State on Friday donated N5 million and 150 bags of 50kg rice to wives of fallen heroes within 82 Division of the Nigerian Army, Enugu.

The governor made the donations in a brief and solemn event to mark the Armed Force Remembrance Day, held at the Abakpa Cantonment, Enugu under strict COVID-19 Protocol compliance.

Ugwuanyi, who held solemn silence for the fallen heroes, said the day was not for long remarks.

“We (Enugu State Government) want to support the Chairperson of 82 Division of NAOWA and wife of the General Officer Commanding (GOC) with the sum of N5 million”.

The governor also bought all the alcohol-based sanitisers, liquid detergent, liquid air fresheners as well as bed sheets and other items made by the graduates of the NAOWA Vocational and Skill Acquisition Centre.

Responding, Major-General Lasisi Adegboye, GOC of 82 Division of the Nigerian Army, thanked the governor for his philanthropic gesture to the Division.

Adegboye also appreciated the governor for leaving his entire busy schedule and creating time to be with the Division “at a special day like this”.

He noted that the reason the Armed Force Remembrance Day, usually celebrated January 15, was not held in its usual traditional way and its attendant funfair was quite known to everybody.

Contributing, Mrs Rasheedat Adegboye, Chairperson, 82 Division of NAOWA, thanked the governor, the GOC, senior staff and other officers of the Division that had supported NAOWA’s Vocational and Skills Acquisition Centre.

She said: “For the graduates of the vocational and skill acquisition centre; I want you to apply all you have learned to improve the socio-economic status and well-being of yourselves and families. For the new intakes to the centre, I want you to take your training seriously; learn and be masters of your chosen skills in order to make a difference in the society, improve your earnings and support your families”.

A total of 32 sewing machines and its accessories were given to the new graduates of the centre that learnt tailoring/fashion designing.

One hundred and seventy bags of fish feeds and other accessories were given to the new graduates of the centre that learnt fish farming among others.[/vc_column_text][/vc_column][/vc_row]