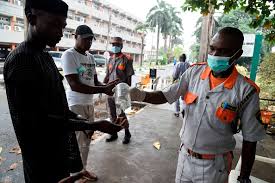 Nigeria Centre for Disease Control (NCDC) registered 1,867 new cases of COVID-19, bringing the total number of infections in Nigeria to 107,345.

The NCDC disclosed this on its official Twitter handle on Friday.

It noted that eight people also died from the virus in the last 24 hours, bringing the death toll to 1,413.

The centre added that the new cases were reported from 23 states of the federation and the Federal Capital Territory (FCT).

It stated that 705 patients across the nation had been treated successfully and recovered from the virus in the last 24 hours, adding that the number of recovered patients had risen to 84,535.

It noted that “our discharges today include 277 community recoveries in Lagos State, 150 in Kaduna and 78 in Plateau, managed in line with guidelines”.

Meanwhile, it declared that the new highly transmittable variant of the COVID-19 had not been detected in the country.

It explained that the centre was able to determine the absence of the new COVID-19 variant in the country through genomic sequencing it conducted in partnership with African Centre of Excellence for Genomics of Infectious Diseases and the Reedemer’s University, Ede, Osun State.

“Viruses mutate, emergence of new variant strains of COVID-19 isn’t news. Genomic sequencing in Nigeria shows no evidence yet of variants associated with increased transmission, but we’re looking,” it said.

The NCDC, however, said it would not relent in its disease surveillance efforts.

The 1,867 new infections recorded in the last 24 hours was the highest single day rise since the index case was confirmed on February 27, 2020.

Last week, the country surpassed its existing highest weekly record of COVID-19 infections by recording over 9,800 cases in seven days.