Across Africa Magazine welcome to our website
Home Polity “Terrorists no Longer Control an Inch of Nigeria’s Territory”, APC Insists 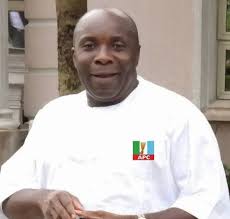 The All Progressives Congress (APC) has advised Nigerians to stop politicising the issues of security and efforts of security services, particularly the Armed Forces, to keep Nigeria safe.

The party gave the advice in a statement signed by Senator John Akpanudoedehe, on Friday in Abuja, while celebrating with the military officers on the Armed Forces Remembrance Day.

“We must collectively shun the practice of politicising issues of security and the efforts of our security services, particularly the Armed Forces to keep the country safe. We should rather support their efforts to further degrade the capacity of terrorists and other criminal elements. We invite Nigerians to rededicate themselves to the patriotic call contained in our National Anthem, which reads in part: ‘The labours of our heroes past, shall never be in vain,” Akpanudoedehe, also Secretary, APC Caretaker and Extra-ordinary Convention Planning Committee, said.

He said apart from attacks on soft targets, Boko Haram and its affiliates had been seriously degraded, adding, “terrorists no longer control an inch of Nigeria’s territory”.

The APC chieftain said in the areas of barracks infrastructure, healthcare, among other welfare initiatives for Armed Forces personnel and their families, President Muhammadu Buhari-led government had achieved record investments.

Akpanudoedehe said this was aimed at improving military personnel welfare for the living and families of the departed.

He said military officers constantly put their lives on the line to defend Nigeria’s territorial integrity, so that we all could live free and safe.

The party chieftain congratulated President Buhari on many visible and verifiable achievements of the military in the ongoing fight against insurgency and violent crimes in the country.

He said these achievements were contained in the compendium: “Security Checklist: “As Nigeria Marks Armed Forces Remembrance Day”, which was released to the public on Thursday.

“From the country’s 30 month civil war, which ended on January 15, 1970 to the fight against terrorism, banditry and other emerging violent crimes, many servicemen have paid the supreme price for our safety, peace and unity,” Akpanudoedehe said.

The Secretary, APC Caretaker and Extra-ordinary Convention Planning Committee, prayed for protection of the living, and remembered the departed heroes and the families they left behind.

He noted that the Nigerian military had undoubtedly made the country proud from the international peace keeping missions to addressing security challenges within the country and overall discharge of its constitutional responsibilities.

Akpanudoedehe said several innovations and inventions by the Armed Forces had resulted in the production of military hardware, infrastructure development, restructuring and reorganisation of its operations.

He said in terms of investment in military hardware, intelligence and tactical training for servicemen, the country’s defence capacity had greatly improved over the years.

The Armed Forces Remembrance Day is observed on every January 15 to commemorate the fallen heroes of the Nigerian Armed Forces.

The day is also used to honour military veterans and their families, especially those who fought and died in the nation’s civil war.

In Nigeria, being a former British colony, the day was formerly celebrated on November 11 as Poppy Day in honour of the end of the First World War.

Upon the Federal Government’s victory against the Biafran troops on January 15, 1970, the day was moved off the calendar of the Commonwealth of Nations and changed to January 15 in commemoration of the end of the Nigerian Civil War.[/vc_column_text][/vc_column][/vc_row]