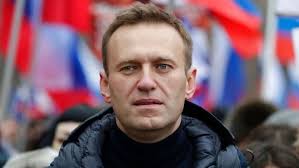 Russian dissident Alexei Navalny has been detained at Sheremetyevo airport near Moscow, according to a post on Navalny’s Telegram channel.

He was detained while going through passport control, according to the post.

Navalny’s plane from Berlin was originally due to land at Vnukovo airport on Sunday evening but diverted to Sheremetyevo at the last minute, according to a dpa reporter.

The plane was originally due to land at Vnukovo airport but display boards there said the plane had been diverted to the capital’s larger international airport.

The flight from Berlin, operated by Pobeda airline, was circulating above Vnukovo before it changed its course.

Russian authorities previously said they planned to arrest Navalny, 44, immediately upon return to his home country, accusing him of breaking the terms of a suspended sentence and probation. (dpa)[/vc_column_text][/vc_column][/vc_row]