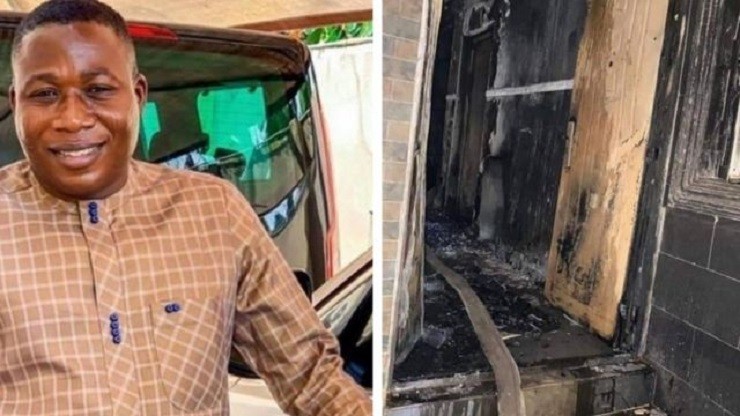 The residence of Chief Sunday Adeyemo, alias Sunday Ighoho, in the Soka area of Ibadan, was gutted by fire in the early hours of Tuesday.

This fire incident at his house is happening barely a week after he led a campaign for the eviction of Fulani herdsmen from Oyo State.

The eviction rage by Sunday and Oyo youth, led to the destruction of the residence and properties of the Seriki Fulani in the state, Alhaji Saliu Abdulkadir.

However, in his Reaction to the burning of his house by yet to be known persons, Chief Sunday Ighoho has said he was safe and was not in the house when the attack took place.

“This happened at about 1am today. They thought I was still in the house. Laugh. I am safe and sound my people. You can’t kill a breeze. In 48hours the attacker would be revealed and would run Mad. I have spoken”.

A statement by the Police Public Relations Officer, Oyo State Police Command, CSP Olugbenga Fadeyi on Tuesday, stated that the arsonists shot in the air several times as they set fire to the house.

“At about 0620 hrs of today 26/01/2021, a report was received at the Santo Police Station that some unidentified hoodlums came to Sunday Igboho’s house at Soka area of Ibadan in a Hummer bus and Micra (taxi) firing sporadically, and set the house ablaze. The mini sitting room got burnt in the process while the value of other properties is yet to be estimated. Immediately the DPO Sanyo got wind of the incident, he contacted fire service while he also went to the scene for on the spot assessment. The fire was eventually put out” he said.

Investigation according to the PPRO, had begun to ascertain the cause of the fire.

Posted by adminpri - June 23, 2021 0
Federal Government has taken delivery of medical equipment worth one million dollars donated by the government of the Kingdom of…