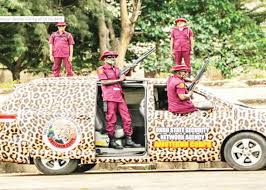 The police said Danjuma Adamu, a resident of Olorunsogo Market area, Modakeke, reported the incident at about 3.15pm January 26.

Adamu had lodged a complaint that the Amotekun operatives invaded his farm at about 11.30am on Tuesday and shot randomly at the workers, 10 of whom sustained varying degree of pellet wounds.

Following the report, a team of policemen were said to have been dispatched to the scene and evacuated the injured persons to the Obafemi Awolowo University Teaching Hospital (OAUTH) for treatment.

Opalola Yemisi, a Deputy Superintendent of Police (DSP) and spokesperson for Osun State police command could not be reached for comments on the incident at the time of filing this report as several calls on her mobile phone were not responded to.

However, a senior police officer who does not want his name mentioned said the case was under investigation at the State Criminal Investigation Department (SCID).

COVID-19: Workers On GL12 Downwards To Resume Duty In Delta