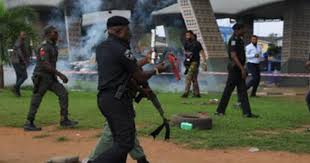 Mr Olawale Olokode, the Commissioner of Police in Osun, has demanded the Department of Security Services (DSS), Osun Command, to produce the DSS officers who caused the death of a police officer in the state.

Osun Police Spokesperson, DSP Yemisi Opalola, said Olokode met with the Director of DSS and demanded that those responsible for beating a police officer, be produced for prosecution.

Opalola, in a statement, said Cpl. Rauf Fawale, who died after the beating, was working at Dada Estate Police Station in Osogbo.

“We heard that he was beaten by three personnel of DSS on Saturday. He was reportedly beaten by one David Olowoporoku and two others. The names of the two others have yet to be known but we know that of David Olowoporoku. They beat him and he was rushed to a hospital after someone informed his divisional police officer. He had a head injury so much so that even when he was taken to the hospital, they thought he was dead. The doctors tried to save his life but he died. Before he died on January 23, he could not even talk again. His body was later released to his family for burial,” she said

Opalola said since the attack, the CP met with the Director of DSS and he promised to produce the three culprits.

She said the DSS Director explained that the accused persons were facing a disciplinary committee.

She said the CP, however, insisted that those involved should be brought to the police since the matter involved the police for discreet information and investigation and later for prosecution.

She said the CP had also reported to the Force Headquarters and that the case was still ongoing as she assured the public that necessary action would be taken and no sinner would go unpunished.

“This will serve as a deterrent for others even for members of the force. We commiserate with the family of the deceased. We pray that God will give them fortitude to bear the loss. We appeal to all the sister security agencies to see ourselves as one family working towards same goal, there shouldn’t be any rivalry among us. We are to provide adequate security for the country, lives and property and no matter the misunderstanding, we should channel the matter to the appropriate quarters for amicable resolution. We should not take laws into our hands,” the CP said

He, however, called on the public not to worry on the issue as that would be resolved and that such thing would not happen again.

Opalola, however, said the cause of the altercation between the deceased and the DSS officers was not known.