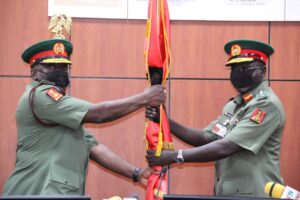 The new Chief of Army Staff, Major-General Ibrahim Attahiru, has taken over the mantle of leadership of the Nigerian Army in an elaborate handing over ceremony by his predecessor, retired Lieutenant-General Tukur Buratai, on Thursday in Abuja.

Recall that President Muhammadu Buhari had, on Tuesday, announced the appointment of Attahiru alongside other service chiefs.

In line with the Nigerian Army tradition, the outgone army chief decorated his successor with the insignia of the office and handed the play of office to him.

The pulling out parade for Buratai will take place on Friday.

The outgone Chief Of Army Staff (COAS) Buratai, while handing over the mantle of leadership, thanked God for a successful service to the nation and Buhari for finding him worthy.

He urged the new army chief to ensure that the Nigerian Army remained professionally responsive in the discharge of its constitutional duties.

Buratai said the army on his watch had ensured that democracy was supported and protected, urging his successor to ensure that the army continued to be loyal and professional.

He commended the principal staff officers, corps commanders, commandant and directors for their cooperation during his time as the army chief.

He also appreciated all the troops serving in all operations both home and abroad, most especially the operation Lafiya Dole, Sahel Sanity, and Delta Safe, among others.

Buratai said as a COAS, he was proud to have defended the nation’s democracy and called on officers and men of the Nigerian Army to make it their duty to defend and protect democracy.

Responding, the new COAS, pledged to sustain the giant stride of Nigerian Army under Buratai, adding that he considered himself lucky to have been given opportunity to succeed Buratai.

Earlier, the Chief of Policy and Plans, Lieutenant-General Lamidi Adeosun, said the former CoAS came, saw and conquered, adding that working with Buratai was a rewarding experience.

Adeosun, while extolling the virtues of Buratai, said that he had achieved so much for Nigerian Army in terms of operational efficiency, personnel welfare and establishment of new units and formations.

He said that the army under Buratai had also progressed well in the area of research and development, especially in the area of manufacturing of hardware locally.

He expressed the confidence that the new army chief had what it would take to carry on with the big show left by his predecessor.

Adeosun commended President Muhammadu Buhari for appointing a worthy successor in the person of Gen. Attahiru and congratulated Buratai for successful bowing out of service after years of meritorious service to the nation.[/vc_column_text][/vc_column][/vc_row]