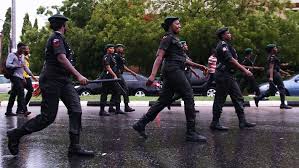 The Police Command in Ekiti on Thursday, justified the dismissal from service of a police constable, Miss Olajide Omolola.

Omolola reportedly got pregnant in an alleged violation of subsisting Police Rules and Regulations.

Omolola, who was attached to the Iye Ekiti Police Station in Ilejemeje Local Government Area of Ekiti, was reportedly dismissed by police authorities for getting pregnant barely a year after graduating from the police academy.

But speaking with newsmen in Ado Ekiti, the Police Commissioner in Ekiti Mr Babatunde Mobayo, said Omolola violated Section 127 of the police regulation.
According to him, the violation attracts serious punitive measures against anyone that contravenes it.

He said the rules and regulations were unambiguous that a woman police must undergo post training experience on the field for at least, two years before marriage and three years before childbearing which he said the officer in question understood very well.

“In police organisation, we have rules and regulations which are being carried out within the ambit of the constitution. The police officers are not even allowed to keep their children that are above 18 years of age in the barracks. Some of these laws were taught in the police colleges before we graduated. These laws have been there. Some stipulated the number of years you must spend before you get married. If you are in police college, you are not supposed to get pregnant. When you pass out, you still need basic trainings and for your attention not to be distracted, you must spend certain minimum period before you get married for you to perform efficiently. The lady in question passed out in May 2020, which is eight months ago and now she is with six months pregnancy”.

He stated Further that, “The Police Act 2020, which is undergoing amendment in the Senate has not repealed that; she has contravened Section 127 of the police regulations. Section 126 of the regulation states that a married woman police who is pregnant may be granted maternity leave. Section 127 says an unmarried woman police who becomes pregnant shall be discharged from the force and shall not be enlisted except with the approval of the Inspector-General of police. We can’t shy away from the oath of office we took, but the Inspector-General of police can still reverse whatever we do. No fewer than 300 policewomen graduated here last year; how would the public feel if they see all of them pregnant in less than a year?”.
“Adding that: “We are not the drafters of the rules, we met them there. All these disciplinary actions are what made us to be able to control our men. No police constable is underage and they should be able to know what to do not to get pregnant within the time prohibited by regulation”.

US Mission To Prioritise Student Visa Applications For Nigerians