Across Africa Magazine welcome to our website
Home News FG N20,000 Grant: ‘Some of The Beneficiaries Drive to The Venue in Flashy Cars’ -Women Allege 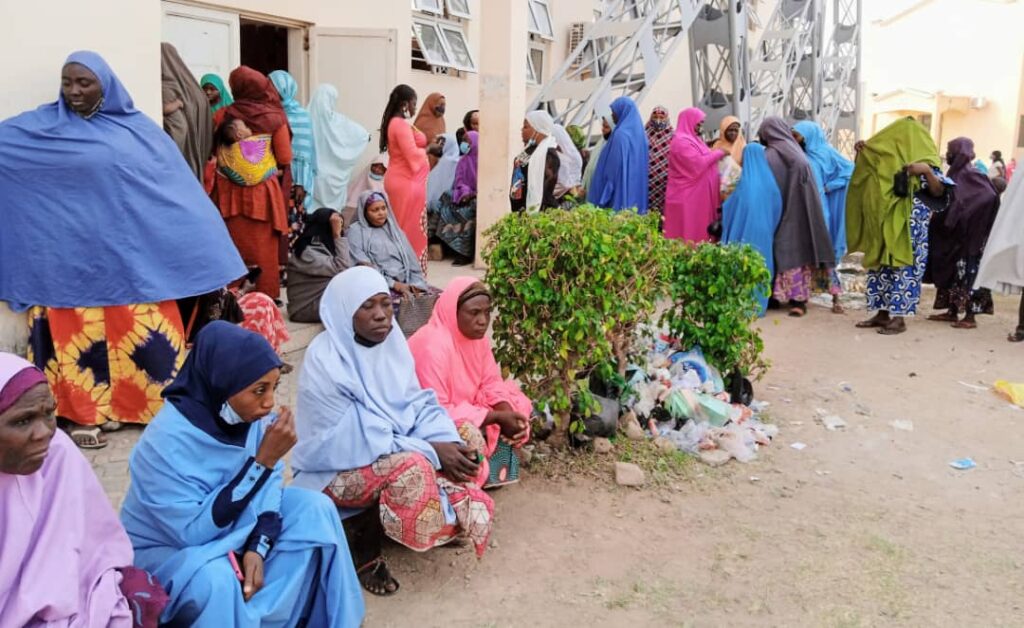 Some women in Kaduna State have decried alleged extortion and nepotism in the ongoing N20,000 grant being disbursed by the Federal Ministry of Humanitarian Affairs, Disaster Management and Social Development in the state.

The women while speaking with the News Agency of Nigeria on Monday in Kaduna at the venue of the disbursement.

They said unidentified persons were extorting money from some of the beneficiaries.

The fund was meant for poor and vulnerable women.

They alleged that most of the targeted beneficiaries were schemed out of the process, adding that those who benefitted were “mainly family and friends of the officials and politicians.”

The women said the process was characterised by massive extortion of unsuspecting beneficiaries by unidentified individuals as One of the women, Kahdija Ahmad, said the grant designed to give a lifting hand to some of the poorest and most vulnerable citizens was ending up in the pockets of the “well-to-do”.

According to her, some of the women that benefited drove to the venue in flashy cars, a clear indication that they do not need such support.

Another woman, Mrs Rabi Mohammed said the names of about 50 of them were collected and were told to come to the venue in group, lamenting that none of them received the money.

“We have been coming here every day for the past three days, with some of us coming as early as 6:00 a.m but got nothing. Others will come, make a call or two and someone will come out from the hall and usher them in. Few minutes later, they will come out smiling with money in their pockets while we stand and watch,” Mohammed said.

She also alleged that some women collected the money in place of other person’s names on the list, “just because they know someone in the system, and we don’t”.

Also, Mrs Hafsat Musbau said she sat close to some women who were mobilising desperate women to go in and collect the money under different names.

But the story was different for Adama Salisu, a 23-year-old girl from Kawo, who said she had received the N20,000 along with her sisters, without any hitch.

According to Salisu, “I am a relation of a serving minister and our names and account details have been collected about a month ago”.

Another lady who spoke on condition of anonymity said her brother, who was among the officials helped her to access the grant.

“My brother works with them, so he managed to get my name into the list, and I got the money,” she said.

When contacted, the Project Accountant, National Cash Transfer Office, Dr Ibrahim Adam, acknowledged that some persons have been arrested and handed over to the police for extorting money from some of the beneficiaries.

Adam, however, denied any sharp practices by officials of the ministry, saying those alleging favouritism and nepotism were not on the list of beneficiaries.

He added that more than 5,000 women had so far received the grant in the state.

The official explained that the beneficiaries were selected from the 40 percent of poor and vulnerable households in the National Social Register (NSR) that were not benefiting from the ongoing Conditional Cash Transfer.

He said currently, only 60 percent of the poorest of the poor and vulnerable households in the NSR were benefiting from the ongoing cash transfer of N5,000 monthly across the country.

“The N20,000 grant for rural women was introduced in 2020 to sustain the social inclusion agenda of President Muhammadu Buhari. The grant is part of the president’s strategy of lifting 100 million Nigerians out of poverty,” he said.

However, an official at the programme coordinating unit at the State Planning and Budget Commission and custodians of the programme on condition of anonymity, said only 1,000 women were selected from the social register to benefit from the ongoing disbursement.

“I do not know how the officials got the remaining beneficiaries, but I know that 1,000 beneficiaries were sourced from the social register and they got their grant between Tuesday and Wednesday,” the official said.[/vc_column_text][/vc_column][/vc_row]