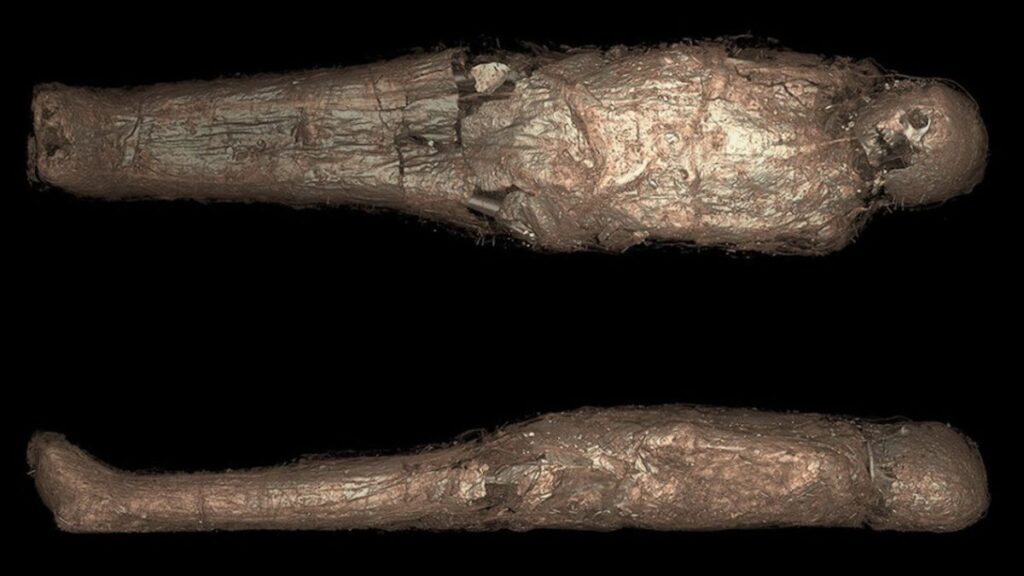 Archaeologists in Australia have uncovered a never-before-seen mummy from ancient Egypt whose corpse was wrapped in a hard mud shell.
In a study published in the PLOS One journal, researchers said the preservation of a corpse in mud has not been previously documented.

“CT scans of an unnamed mummified adult from Egypt, now in the Chau Chak Wing Museum, University of Sydney … reveal it to be fully sheathed in a mud shell or carapace, exposing a mortuary treatment not previously documented in the Egyptian archaeological record,” the researchers said.

Archaeologists said the practice of wrapping a corpse in mud was an attempt to copy elites, who placed corpses in resin shells, by using cheaper and locally available materials.

The corpse was first wrapped in textiles before it was damaged, researchers said.

It was rewrapped and likely placed in the mud shell, according to the study.
The mummy was dated to approximately 1207 B.C. and was acquired by Charles Nicholson, a UK-born politician, and collector who later shipped it to Australia.

A mummy is the body of a person (or an animal) that has been preserved after death.
Mummies were any Egyptian who could afford to pay for the expensive process of preserving their bodies for the afterlife.

The Egyptians believed in life after death.

They believed that they had to preserve their bodies so they could use them in the afterlife.

The Egyptians believed that when they died, they would make a journey to another world where they would lead a new life.

They would need all the things they had used when they were alive, so their families would put those things in their graves.

Egyptians paid vast amounts of money to have their bodies properly preserved.