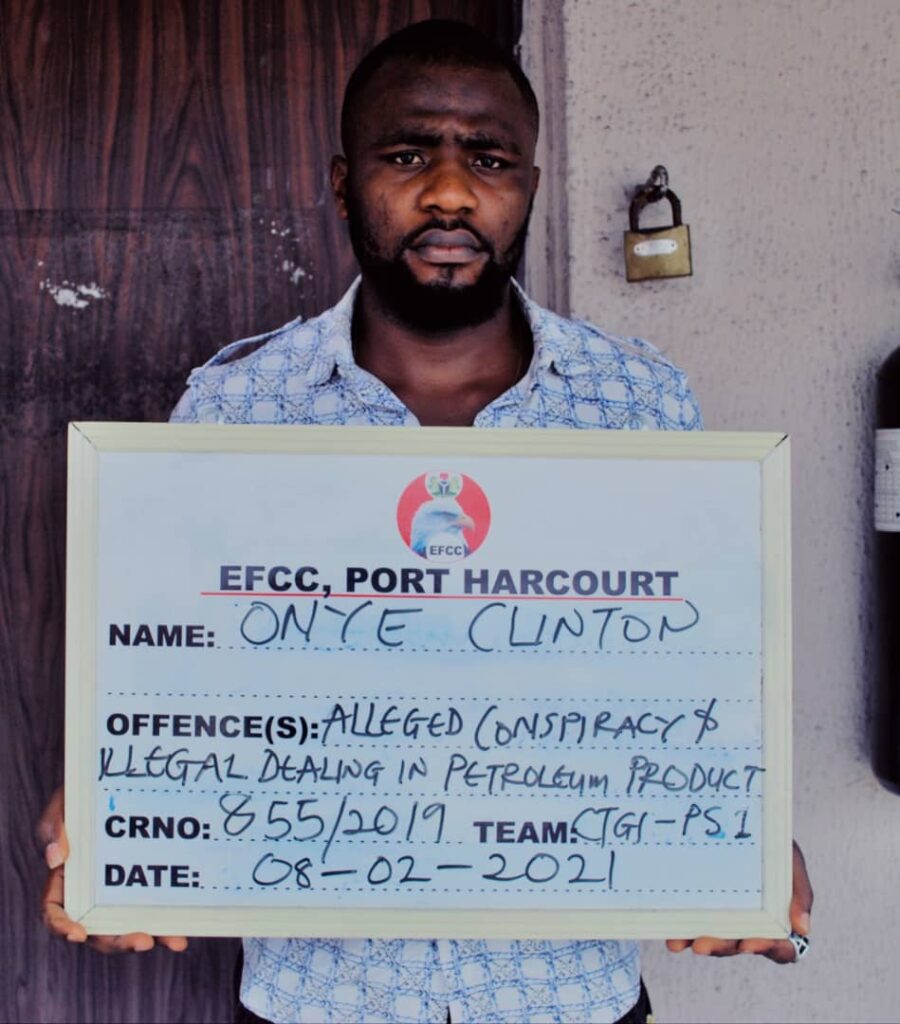 He was jailed on Monday, February 8, 2021 following his arraignment by the Port Harcourt Zonal Office of the Economic and Financial Crimes Commission (EFCC) on two- count charges bordering on conspiracy to deal in petroleum products, contrary to Section 17(1)(a) of the Miscellaneous Offence Act, Laws of the Federation of Nigeria, 2004, and punishable thereunder.

One of the charges read:
“That you, Clinton Onye, and one Okoro, (surname unknown and currently at large), on 19th day of November, 2019, at Eleme Alimini Road, Rivers State, within the jurisdiction of this Honourable Court, without lawful authority or license to deal in petroleum products , had in your possession, Eight Hundred and Seventy-Five( 875) liters of Automative Gas Oil (AGO) in a Sky-blue Volvo 240 Car, with registration number: Lagos BF 573 EKY and thereby committed an offence contrary to Section 17(1)(a) of the Miscellaneous Offence Act, Laws of the Federation of Nigeria, 2004 and punishable thereunder”.

He pleaded “guilty” to the charges when they were read to him.

Base on his plea, prosecuting counsel, S.M.H Ibekwute prayed the court to sentence him accordingly. However, defense counsel, B. J.O Ekowo pleaded for leniency, assuring the Court that he had become remorseful.

Delivering judgment Justice Abubakar found Onye guilty and sentenced him to five years imprisonment with an option of fine of N300, 000( Three Hundred Thousand Naira only).

The convict was arrested by the Anti- Bunkering Team of the 6 Division, Nigerian Army, Port Harcourt and handed over to the EFCC for further investigation and prosecution.[/vc_column_text][/vc_column][/vc_row]