Sanwo-Olu made the announcement through his verified Twitter handle.

He said the remarkable achievements of Jakande as Governor in Lagos State would remain indelible for generations to come. 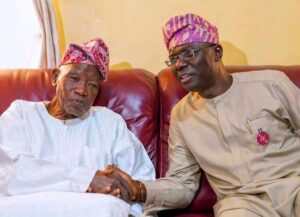 ”With gratitude to God for a worthy life well spent in the service of Lagos State, Nigeria and humanity, I announce the death of a venerable statesman, outstanding politician, public administrator and the first Civilian Governor of Lagos State, Alhaji Lateef Kayode Jakande.

”Baba Jakande’s record of service as a journalist of repute and a leader of remarkable achievements as governor of Lagos State will remain indelible for generations to come. His death is a collosal loss and he will be missed. On behalf of the Government and people of Lagos State, I want to express my sincere and heartfelt condolences to the family, friends and comrades of Baba Jakande. May Allah grant him Aljanat Firdaus, Aamin,” he said.

NUJ, in a statement by Adeleye Ajayi, Chairman, and Tunde Olalere, Secretary, said: “We mourn the demise of the first Civilian Governor of Lagos State, Alhaji Lateef Kayode Jakande (LKJ) at the age of 91. He recorded massive infrastructure development during his tenure, especially in the areas of housing and education (building of schools).

“A former Minister of Works and Housing. It is on record that he made it possible for people to attend schools and had shelters. He was an erudite journalist, publisher, administrator par excellence and a political giant. He made indelible marks in Nigeria’s political history dated back to his days in Action Group and UPN. Nigeria’s political history cannot be written without a mention of Jakande (Baba Kekere).”

Jakande, in 1949, began a career in journalism first with the Daily Service and then in 1953 joining the Nigerian Tribune.

In 1956, he was appointed Editor-in-Chief of the Tribune by the owner, late Chief Obafemi Awolowo. Jakande’s editorials were factual and forthright, and were treated by the colonial powers with respect.

After leaving the Tribune in 1975, Jakande established John West Publications and began to publish The Lagos News.

He served as the first President of the Newspaper Proprietors Association of Nigeria (NPAN).

Posted by adminpri - May 14, 2020 0
Edo State Government on Thursday discharged 20 persons under treatment in COVID-19 isolation centres in the state. 17 of the…

Posted by adminpri - June 21, 2021 0
Spread of COVID-19 in Nigeria continues to record a significant decrease as the latest statistics by the Nigeria Centre for…