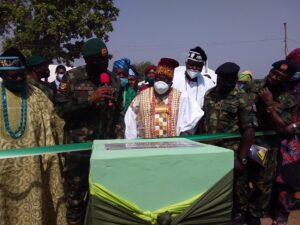 The Chief of Army Staff (COAS), Major-General Ibrahim Attahiru, on Friday said the decision to site some Command Secondary schools outside military barracks was to make it more accessible to children of its host communities.

Attahiru made the assertion at the inauguration of a 900 bed capacity hostel at the Command Science Secondary School in Saki, Oyo State.

The COAS, represented by Major-General Anthony Omozoje, General Officer Commanding (GOC), 2 Division of the Nigeria Army, said the Command School system was initiated by the Federal Government for children and dependants of its personnel to have access to quality education.

“The command school system of the Nigeria Army was instituted as part of the Federal Government programne for personnel, where their dependants can get qualitative education at a subsidised rate. Nigeria Army, being people’s army, has started siting some of the Command Schools within the host communities, departing from the practice of having them within the barracks.

“The essence is for the children of the host communities to benefit from what the Nigeria Army offers. In the command secondary schools you don’t only get a very good education but also get the discipline and character that the Nigeria Army are known for,” he said.

The COAS said the inauguration of the hostel facilities was in furtherance of the Nigeria Army’s deliberate programme, to give all the students in the Command School System, the best accommodation.

He said the facility would contribute to the wellbeing of the students and help them to live better lives.

Attahiru commended Governor Seyi Makinde, the Okere of Sakiland, Oba Khalid Oyedepo and other traditional rulers in Oke- Ogun area of the state, for their support.

He assured the people of the state and Nigeria in general of adequate security, noting that the Nigeria Army was up to the task.

Earlier, the Okere of Sakiland, lauded the COAS for the project and other ongoing army projects in the community, describing them as huge.

Oyedepo said that the Oke-Ogun area of the state is made up of 10 Local Government Areas (LGAs) and with its people predominantly farmers had been abandoned in terms of projects execution, until the intervention of the army.

He solicited for more projects from the Nigeria army, saying they are ready to provide them with land, without any compensation.

The Okere of Sakiland also requested for the presence of more military personnel as a result of the current security threats being witnessed in the area.[/vc_column_text][/vc_column][/vc_row]