Justice Taiwo Taiwo of the Federal High Court, Abuja on Monday, ordered the police to produce former governor of Imo, Ikedi Ohakim in court for arraignment.

Ohakim and Chinedu Okpareke were dragged to the Federal High Court by the police over allegations of threatening and harassing Mrs Chinyere Amuchienwa. 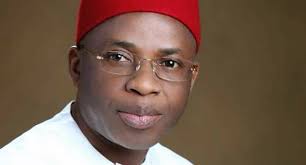 When the matter was called, the prosecuting counsel, Mr Stanley Nwodo, told the court that the matter was for arraignment but he was surprised at the absence of the defendants in court.

“The matter is slated for arraignment but to my greatest consternation, Ohakim and Okpareke were not in court. Ohakim has been on administrative bail since November 11, 2020,” he said.

Counsel to Okpareke, Mr Emeka Etiaba, SAN, told the court that his client was not in court because he was not served with any hearing notice to appear in court.

Etiaba, however, undertook to ensure that his client was in court on the next adjourned date and asked the prosecutor to also inform Ohakim.

Delivering a ruling, Justice Taiwo who confirmed that there was no hearing notice in the court’s file, enjoined the prosecutor to ensure that the defendants were in court on the next adjourned date.

The judge said it was his responsibility to ensure their attendance in court.

“The matter is brought before me for the first time for arraignment. The court will overlook the absence of the defendants in court today because it is the responsibility of the prosecutor to produce them in court or to ensure that they attend court. They must be produced in court at the next adjourned date for arraignment and possible commencement of trial”.

The judge asked parties to prepare themselves in case the court decides to commence trial.

He adjourned the matter until March 3 for arraignment and possible commencement of trial.

According to the charge number FHC/ABJ/CS/287/2020, Ohakim and Okpareke were alleged to have threatened to release a nude photograph of Amuchienwa, if she fails to drop charges of attempted kidnap against them.

In the five-count charge dated November 25, 2020, the police alleged that Ohakim and Okpareke knowingly and intentionally transmitted communication through a computer system to harass and bully Amuchienwa.

According to the charge, the offence is punishable under Section 24(1)(a) of the Cybercrime Act 2015.

Some of the charges read, ”That you Chinendu Okpareke ‘m’ 49, and Ikedi Ohakim ‘m’ and others now at large on August 13, 2020 within the jurisdiction of this court did conspire among yourselves by knowingly and intentionally sending messages by means of computer system or network in a grossly offensive, pornographic, nude of an indecent obscene and menacing character of one Chinyere Amuchienwa ‘f’ and thereby committed an offence punishable under Section 27 (1)(a) of the Cybercrime Act 2015.

”That you Chinendu Okpareke ‘m’ 49, and Ikedi Ohakim ‘m’ and others now at large on August 13, 2020 within the jurisdiction of this court did conspire among yourselves to cause annoyance and criminal intimidation to one Chinyere Amuchienwa ‘f’ and thereby committed an offence punishable under Section 27 (1)(a) of the Cybercrime Act 2015.

Posted by adminpri - July 13, 2021 0
Senator Orji Kalu has refuted social media reports of him paying a private visit to the British High Commissioner to…

Posted by adminpri - June 29, 2021 0
Disregard for children’s rights amid war and upheaval “is shocking and heartbreaking,” UN Secretary-General António Guterres said on Monday during…