At the Murtala Muhammed Airport (MMA), Lagos, a mishap was Tuesday evening averted when an Azman Aircraft’s Boeing 737 aircraft tyre bursts on landing.

It was gathered that fire service men of the Federal Airports Authority of Nigeria (FAAN) were on ground and immediately evacuated the over 100 passengers onboard in case of fire. 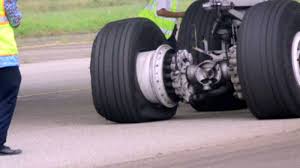 “The closure is due to a landing incident involving a Boeing 737 Azman Air aircraft with registration 5N SYS, and flight number ZQ2325. The aircraft had a tyre burst after landing on this runway. All passengers and crew on board the aircraft were safely evacuated at 1908 hours.

“Officials of FAAN Air Rescue and Fire Fighting Services, AIB and NAHCO are already working to ensure the aircraft is towed out of the runway to restore normalcy.”

Besides, it was not clear where the aircraft was coming from, but sources said an Azman aircraft departed the Nnamdi Azikwie International Airport (NAIA), Abuja in the evening of Tuesday.

The runway was reopened early this morning.

Posted by adminpri - June 9, 2021 0
Niger State Government has begun the official sales and distribution of fertilizer for the 2021 wet season at the cost…