Former chairman of the defunct Pension Reformed Task Team (PRTT), Abdulrasheed Maina, on Friday, sensationally revealed at a Federal High Court, Abuja, why he jumped bail and fled the country.

He said his leg would have been amputated if he had left the shores in search of medical help in Niger Republic.

Maina, in his affidavit to support the bail application filed before Justice Okon Abang, said a surgical operation was performed on his kneel to save his leg from amputation. He prayed the court to grant his prayer for bail so that he could attend to his current deteriorating health challenge. 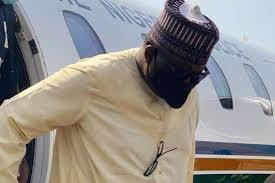 Maina had, on January 20, approached Justice Abang for another bail after his arrest for jumping initial bail granted him.

In a motion on notice dated and filed on Dec. 24, 2020 brought by one of his lawyer, Anayo Adibe, Maina said the application became necessary over his worsening health condition. He also told the court that he had reasonable and responsible sureties who were willing to act as sureties if granted bail.

At the resumed hearing, Sani Katu, SAN, who appeared for Maina, said he had three applications filed before the court. Besides a bail application, said he had filed an application praying the court for the recall of the prosecution witnesses in the trial.

The counsel said due to Maina’s failing health, a letter was written to the Kuje Correctional Centre on the need for his proper medical attention, averring that the correctional centre where he was kept did not have facility to attend to his state of health.

Katu, who said his client was taken to the University of Abuja Teaching Hospital, Gwagwalada recently, pointed out that the medical report was exhibited in the bail application, urging the court to grant Maina bail with assurance that he would not abuse the privilege, having sworn an undertaking to that effect. He said the treatment Maina received outside the country saved his limbs from amputation.

But counsel to the Economic and Financial Crimes Commission (EFCC) Mohammed Abubakar, objected to the bail plea, contending that in Maina’s affidavit in support of his bail request, he did not feel remorse for his action in jumping the first bail graciously granted him by the court.

“The 1st defendant applicant (Maina), without any remorse, stated at paragraph 9 of his affidavit that as as a result of the order of his arrest, he decided to seek for a better medical facility for the treatment of his kneel and was eventually referred to a military hospital in Chad Republic and Niger Republic where the knees surgery was successfully carried out.

“What he is saying is that his jumping bail was a premeditated decision. It was a decision he took by himself in disobedience to the gracious order of this honourable court in releasing him on bail”. Abubakar further argued that by that remark, it showed that Maina also fled to the Republic of Chad.

“It is also clear by this paragraph that while we thought that the 1st defendant applicant fled to Niger Republic, he is now informing the court that he also went to Chad Republic while his American and Nigerian passports are in custody of the court”.

Abubakar said the medical report brought by Maina from the University of Abuja Teaching Hospital on his current state of health was silent on the knee surgery he claimed he had outside the country. “It is also important to highlight that while the 1st defendant applicant talked about a purported surgery conducted on his kneel and the purported pain he presently suffering on that kneel which he claimed may result in the amputation of his leg if not granted bail, the medical report brought by him is silent about any issue about his kneel; whether he is feeling pain or surgery ever performed in the kneel before”.