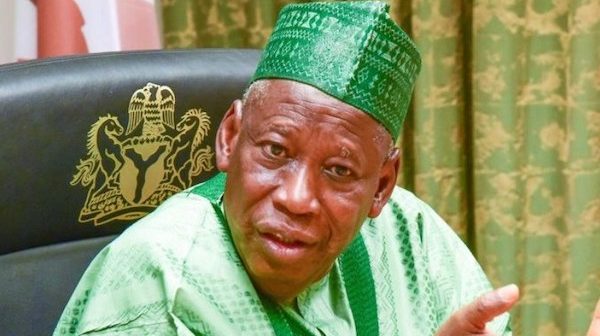 Governor Abdullahi Ganduje of Kano State has appealed to the Federal Government to re-open the Malam Aminu Kano International Airport, Kano to allow for the resumption of international flight operations.
This is contained in a statement issued by the Chief Press Secretary to the governor, Abba Anwar in Kano.

The governor spoke when he led a delegation of legislators, business, traditional and civic leaders to pay a courtesy visit to the Minister of Aviation, Senator Hadi Sirika, in Abuja.

He lamented that the continued closure of the airport was causing hardship to international travelers from the Northern part of the country, as the action was severely impacting on ease of doing business in Kano.

“The closure of MAKIA has impacted negatively on the business environment in Kano, which is the commercial nerve center of Northern Nigeria and even some West African Countries.

“We appreciate President Muhammadu Buhari for the completion of the International wing of the Mallam Aminu Kano International Airport because it will further facilitate commercial activities, and we fervently appeal for the resumption of international flight operations at the airport,” he explained.

The governor expressed concern over the effect of the continued suspension of international flights to and from the airport by passengers and service providers.

According to him, the Kano State government has put in place all that was necessary to make the state healthy for flights, including mobilisation of the populace for the COVID-19 vaccinations.

“It does not make economic sense for the government to spend so much money, as it has done in the airport, and just decide to leave it dormant, with the attendant degeneration on infrastructure, staff redundancy, revenue losses and hardship to travellers, amongst others”.

He, however, told the delegation that the decision to suspend international flights to and from the airport, like the ones in Enugu and Port Harcourt, was for health and security reasons.

The Minister acknowledged the hardship faced by passengers and service providers patronizing the airport, promising that everything that was necessary for the resumption of international flight operations at the airport would be fast-tracked to ensure that it resumes soon.

He, however, challenged Kano indigenes to create activities that would make the airport more viable through increased passenger traffic.

State-Of-The-Nation: Governors To Meet May 19