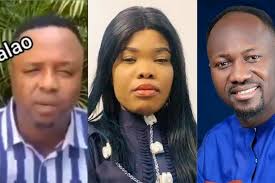 Mike Davies has come out to publicly render an apology to the Senior pastor of Omega Fire Ministries, Apostle Johnson Suleman after accusing him of sleeping with his wife.

Well, he has made a U-turn as he begged for forgiveness in a video circulating online.

This apology where he described the renowned man of God as his Spiritual father, is coming after he has dragged the clergyman with many accusations.

Posted by adminpri - July 13, 2021 0
Flood triggered by days of incessant rains has washed away Low-Cost Cemetery and destroyed buildings in Gashua LGA of Yobe…