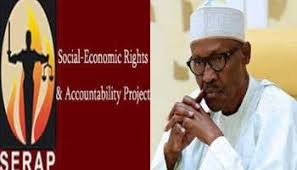 Socio-Economic Rights and Accountability Project (SERAP) has filed a lawsuit asking the Federal High Court in Abuja to restrain and stop President Muhammadu Buhari and the Federal Government from borrowing about N895 billion of Nigerians’ money in the form of their unclaimed dividends and balances in dormant accounts.

The legal action is due to the recent plan by the Federal Government to take over and borrow unclaimed dividends and dormant account balances owned by Nigerians in any bank in the country but excludes dormant official bank accounts by all branches of government and their agencies.

This disclosure is contained in a statement issued by SERAP on Sunday, March 14, 2021, and seen on its website as quoted by Nairametrics.

The move by the Federal Government under the guise of the patently unlawful, unconstitutional and discriminatory legislation known as the Finance Act, 2020, has been termed illegal by SERAP.

What SERAP is saying in the suit number FHC/ABJ/CS/31/2021 filed last Friday, is seeking, “An order of perpetual injunction restraining and stopping President Buhari from demanding, taking over, borrowing, and collecting Nigerians’ money in the form of their unclaimed dividends and funds in dormant accounts or transferring and moving the money into a trust fund known as ‘Unclaimed Funds Trust Fund”.

In the suit, SERAP is arguing that “The Federal Government should not be allowed to borrow Nigerians’ money. Borrowing unclaimed dividends and funds in dormant accounts owned by ordinary Nigerians would negatively affect their right to an adequate standard of living, and access to clean water, quality healthcare and education”.

SERAP said despite Nigeria’s dwindling oil revenue, growing level of public debt and widespread poverty, public officers including the President, Vice President, governors and their deputies, and members of the National Assembly have refused to cut their emoluments, allowances and security votes. They said that at the same time, millions of Nigerians continue to bear the brunt of mismanagement and corruption”.

The statement also said that joined in the suit as Defendants are: Mr Abubakar Malami SAN, Attorney General of the Federation and Minister of Justice; the Senate President, Ahmad Lawan; the Speaker of House of Representatives, Femi Gbajabiamila; and the Minister of Finance, Budget and National Planning, Ms Zainab Ahmed.

SERAP is also arguing that “For there to be a borrower, there must be a lender. The intention to enter into such borrower-lender relationship must be known to both parties. Any other arrangement that allows a borrower to access funds from a lender without the knowledge and express consent of the lender will amount to stealing”.

The suit filed on behalf of SERAP by its lawyers Kolawole Oluwadare and Ms Adelanke Aremo, partly reads, “By the combined reading of section 44(1) of the Nigerian Constitution 1999 (as amended) and Article 14 of the African Charter on Human and Peoples’ Rights, the Federal Government has absolutely no right to borrow Nigerians’ money in the form of their unclaimed dividends and funds in dormant accounts without their knowledge and express consent”.

“The move to borrow Nigerians’ money amounts to unlawful expropriation, as it is neither proportionate nor necessary, especially given the unwillingness or inability of the government to stop systemic and widespread corruption in MDAs, cut waste and stop all leakages in public expenditures. The borrowing is also not in the public interest”.

“Borrowing unclaimed dividends and funds in dormant accounts without due process of law and the knowledge and explicit consent of the owners is arbitrary, and as such, legally and morally unjustifiable”.

“To create a valid trust relationship, there must be an explicit agreement between the setlor and the trustee, for the benefits of the trust beneficiary. There must also be sufficient evidence of the setlor’s intention to create a trust. The relationship cannot be arbitrarily created. It can also not be forced or assumed unilaterally, which is exactly what the Federal Government is pushing to do in this case”.